This is the second part of a two-part series. In this post, I share insights from publically available EITI datasets on payments made by mining companies to the government of the Democratic Republic of Congo. (The Guinea-focused first part of the series is here.)

It focuses on the Ruashi mine, a single open pit copper and cobalt mine in the southeastern Katanga region, and draws on analysis from NRGI’s 2018 report on the fiscal impact of the country’s amended mining code. Figure 5 shows the difference between actual payments from the first six years of production of the mine, according to EITI reports, and what our fiscal model, based on the mine’s actual costs and production accessed through S&P Global, estimates the mine should have paid in different taxes if it had stricly applied the terms of the mining code applicable at the time.

The results shown in figures 5 and 6 are interesting. First, total payments are almost USD 60 million higher than what our model estimated, which contrasts with public perception about the mining sector’s overall weak fiscal contributions in DRC. Second, actual payments are fundamentally different from estimated taxes. The mining code’s fiscal regime relies heavily on a corporate income tax, a witholding tax on dividends, and remuneration of the state’s free equity, three payments based on the companies’ declared profits. But most of the payments that were actually made were either based on the mine’s production (royalties, export taxes, transport taxes, etc.), or on the mine’s inputs (import duties, wage taxes). In particular, payments that were not foreseen by the mining code—to the state-owned company Gecamines, to local or central government authorities—are all based on production, or the value of production. As most production-based and input-based taxes are deductible from taxable profits, this could explain the lower realized payments of profit-based taxes.

Figure 1 (Note: wage taxes have a legal basis in the mining code, but are not captured by our model, so I assumed in figure 5 and 6 that the taxes collected correspond to forecasts.) 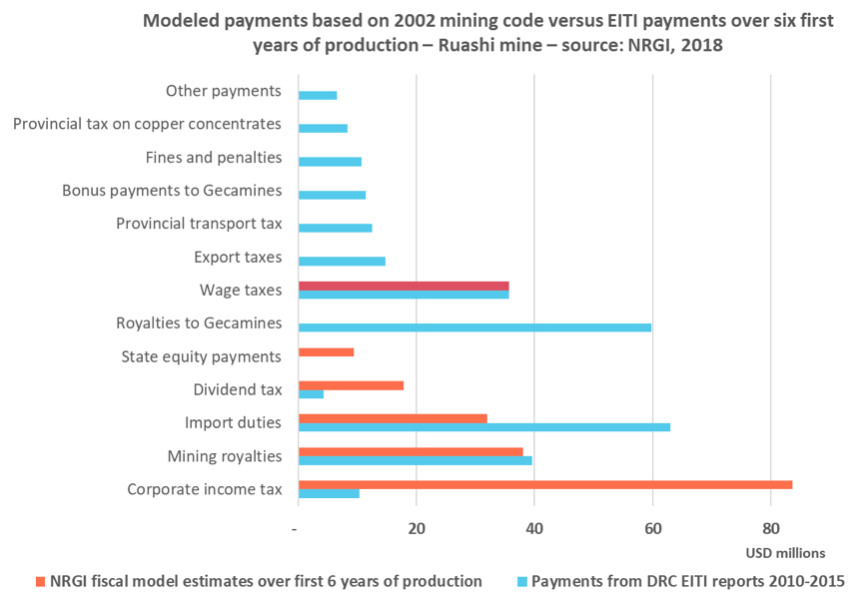 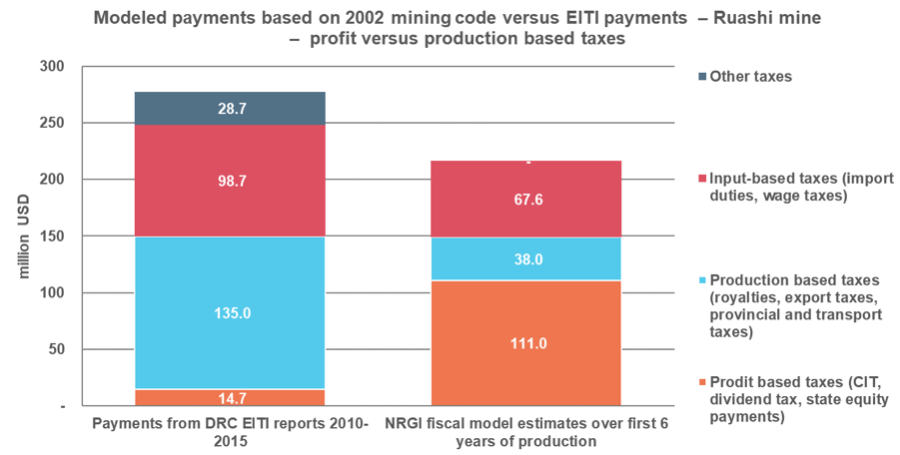 There are three reasons that explain the differences between our estimates and reported payments.

First, Metorex, the initial investor behind the Ruashi mine, accessed its mining license by signing an agreement and subsequent amendments with Gecamines in exchange for a number of payments to the state owned company: a 25 percent carried equity, a USD 7 million bonus payment and a “royalty” of 2.5 percent on gross sales.

Second, the local authorities in the province where the mine is located collect taxes that are formally excluded from the mining fiscal regime but collected in practice. The two most important are a tax on the production of copper concentrates and a tax on road usage. Both are defined in provincial regulations as an amount of USD per tonne of ore exported. All copper and cobalt exports in practice go through the DRC’s southern border with Zambia.

Third, other government agencies are known to impose levies with a certain level of discretion. For instance, according to Article 234 of the mining code, there are no formal export taxes, but custom authorities can receive payments based on their “export services,” within a maximum of 1 percent of the gross sales value.

EITI payments reveal the reliance of the DRC government on production-based taxation, despite a (mostly) profit-based fiscal regime. This reliance is the consequences of choices made by multiple institutions with some level of responsibility over the mining sector, including local governments, state-owned companies and other autonomous government entities. These choices might result from a lack of capacity to oversee more complex profit-based taxes, or from disagreements over revenue-sharing mechanisms, or reveal a preference for simpler forms of taxation, which typically result in earlier payments.

One can conclude that Congo, and perhaps other countries, might be making a wrong move in designing fiscal regimes based largely on taxing profits. If the DRC had developed a mining fiscal regime based on more inclusive consultations, it might today have a very different mining code. This could have both given greater certainty to investors and better reflected the government’s actual practice of relying primarily on production-based taxation. The new government of President Felix Tshishekedi might want to reflect on past revenue collection from Ruashi and other projects as it faces important challenges in implementing a controversial 2018 mining code amendment.

These two examples from Guinea and DRC validate the countries’ choices in publishing information on their mining industries. Through EITI payment data, or other payment data released annually by companies following disclosure requirements in various jurisdictions, as well as publically available mining contracts and additional contextual information (guidance on exploring this information is available in this excellent guidebook), governments, activists and independent analysts can better understand some of the challenges in taxing international mining companies and how to address them.