Pushing for Better Extractives Contract Disclosure in the DRC

The precarious political and security situations in the Democratic Republic of Congo (DRC) continue to make global headlines. But despite the upheaval, government actors and civil society advocates have made strides in the important initiative to make public many of the contracts that govern extraction of the country’s bountiful natural resources.

Since 2016, the Natural Resource Governance Institute (NRGI) has engaged with the DRC’s Ministry of Mines and its Ministry of Oil to develop a publicly accessible open data platform for mining and hydrocarbon contracts. The fruit of this partnership is a ResourceContracts country portal, which enables civil society organizations, members of affected communities, government officials, researchers and other stakeholders to search for contracts; view summaries of contracts’ key environmental, social, operational and fiscal provisions; and download full contracts as open data. DRC’s ResourceContracts portal provides a clear presentation of disclosed extractive contracts, as well as annotations of the key terms of 16 contracts. The monitoring that this contract transparency enables can help decrease corrupt practices by companies and governments.

Now that the portal has been created, the project’s focus has shifted to the disclosure of missing contracts and environmental and social impact assessments (ESIAs), as well as the creation of contract monitoring units at the ministries. Below, we discuss some of the more significant contracts that have been recently published on ResourceContracts, and outline the broader drive supported by the relevant ministries to advance the contract transparency agenda.

New contracts with supporting documents were published on ResourceContracts.org in March 2018. Among the most significant is the 2012 investment and settlement agreement between, among others, First Quantum Mineral Group (FQM), the Eurasian Natural Resource Corporation (ENRC), the DRC government, Gécamines and Sodimico, regarding the controversial Kolwezi tailings project and the Frontier and Lonshi mines. FQM and other investors were involved in international arbitration proceedings with the Congolese government about the project following cancellation of the relevant licenses by the government. The agreement describes very complex settlement and transaction terms for the settlement of the disputes between FQM and the government and for ENRC’s acquisition of the FQM interest in the projects for a reported $1.25 billion. A quick review of the agreement raises questions (e.g. the amount of ENRC tax liabilities associated with the acquisition, the release of FQM from tax liabilities; and the Congolose government accepting to not prevent or delay the liquidation and winding-up of KMT, the tailings project company) and highlights the need for further analysis. 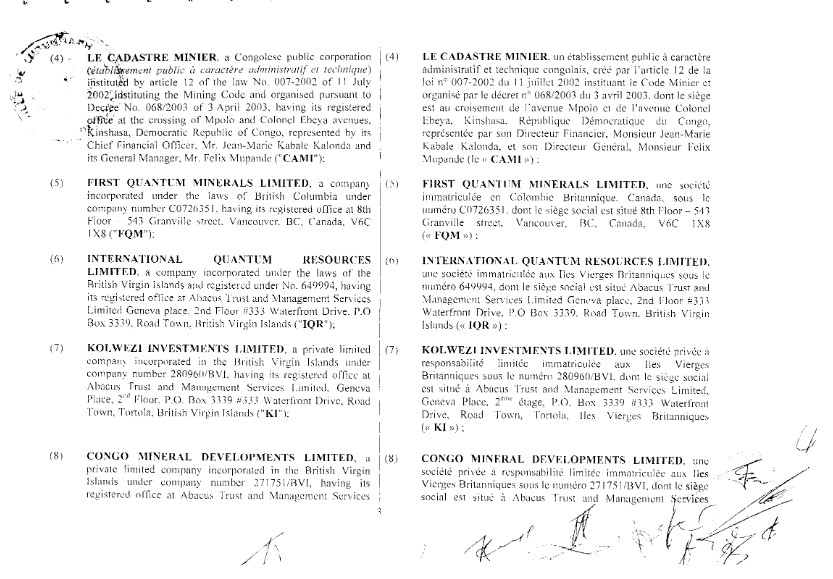 Another important contract that is now available is the agreement between the national government and the ANHUI Foreign Economic Construction Group (AFECC), a Chinese company that created Anhui Congo Investment Minier (SACIM) for the extraction of diamonds in the Kasai Oriental province. The agreement describes the commitments of the two parties, including the crucial role AFECC played in the development of social infrastructures. Reacting to the disclosure of this contract, a civil society activist in Kasai noted that, “It has been five years that we are seeking access to this agreement. Now we know the agreement’s contents and can monitor AFECC commitments vis-à-vis communities. Our review of the agreement shows that the company is committed to building a road and other community projects but nothing has been done to date.” 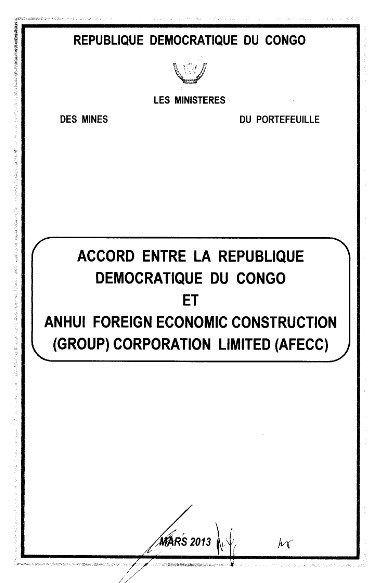 Those pushing for contract transparency have also made progress in the oil sector. The 2017 amendment to the main 1969 agreement between Perenco and the DRC government has been published on ResourceContracts; the document shows that the initial agreement has been extended, and announces an additional investment of $1.5 billion (the highest investment in the DRC oil sector to date).

The next steps in the project will be to facilitate the full and regular disclosure of contracts, as well as to promote the use of data to leverage accountability and inform potential reforms. We are now focusing on publishing undisclosed contractual documents that were identified in a study carried out by Plateforme des Organisations de la société civile intervenant dans le secteur Minier (POM). We will also seek to publish ESIAs that contain environmental and social clauses outlining the relationships between companies and communities surrounding mining areas. An outstanding challenge relates to the use of disclosed contracts. To date, the disclosure of contracts has not created the kind of vigorous public debate that is required to hold stakeholders accountable.

The ResourceContracts platform is an online repository of oil, gas and mining contracts developed in partnership between the World Bank, NRGI and CCSI. The main ResourceContracts.org site was re-launched in 2015 with new features and contracts.The partners behind ResourceContracts continue to work with governments and country-level EITI offices to publish extractives contracts as open data. Country-specific ResourceContracts sites have been implemented for Guinea (2013 and 2017), Philippines (2015), Sierra Leone (2016), DRC (2016), Tunisia (2017) and Mongolia (2017).