Tullow Oil, a U.K.-based company operating mostly in Africa, began voluntarily disclosing payments made to governments four years ahead of the mandatory requirements for EU-based companies.

Accounting for half of the company’s 2016 production, Ghana is important to Tullow. The reverse is also true: Tullow is the operator of Jubilee and Tweneboa-Enyenra-Ntomme (TEN), the country’s major producing oil fields. Tullow’s sustained period of reporting in Ghana and elsewhere provides a unique opportunity to analyze how project developments affect oil company tax payments.

Tullow’s first year of reporting coincides with first oil from the Jubilee field in 2011. Recently released reporting for 2016 corresponds to production at TEN. This six-year span was particularly volatile: Ghana’s oil sector grew rapidly and was hit for the first time by a massive drop in oil price.

So what does the payment data tell us about this period?

NRGI collected and analyzed Tullow’s yearly disclosures across payment types required to be disclosed under EU rules and of relevance to Ghana: license fees, infrastructure payments, royalties and income tax. The payment data confirms some of the textbook features of royalty and tax-based oil and gas fiscal regimes. But it also provides unique insight on the contrary dynamics of a growing sector and dropping prices.

Our analysis excludes payments made to the state-owned Ghana National Petroleum Corporation regarding its approximately 15 percent participating interest in Jubilee and TEN. According to the latest 2014 Extractive Industries Transparency Initiative report and the 2015 Public Interest Accountability Committee report, these payments provided over half of the government's oil revenues. These payments were excluded because Tullow’s reports, unlike those of other companies, such as BP, do not include production entitlements states receive as participants in a project. While Tullow’s disclosure provides highly timely data for six years, its coverage is less comprehensive.

Production entitlements, in this case the royalties (paid in kind), represent over half of the revenues. They have fluctuated considerably, between USD 37 million to USD 87 million annually, depending on the oil price and production volumes.

But it is income tax that by has been most volatile. In 2013 and 2014, it was the largest source of revenues, generating over USD 100 million per year. None was collected in previous years, nor in 2015.

We previously analyzed and attempted to forecast 2015 oil revenues by building a fiscal model for the Jubilee field. Our retrospective analysis, which specifically investigates the drop in corporate taxes, found the international drop in oil prices accounted for some of this fluctuation. However, most of the difference came from deductions against taxable income from Jubilee. From 2010 to 2012, Tullow was recovering its investment in developing the field. Once these costs were recovered, it was paying large corporate tax in 2013 and 2014. But in 2015, Tullow started to offset costs associated with developing TEN against profits made on Jubilee. This led to unforeseen revenues reductions at odds with budgeted figures. 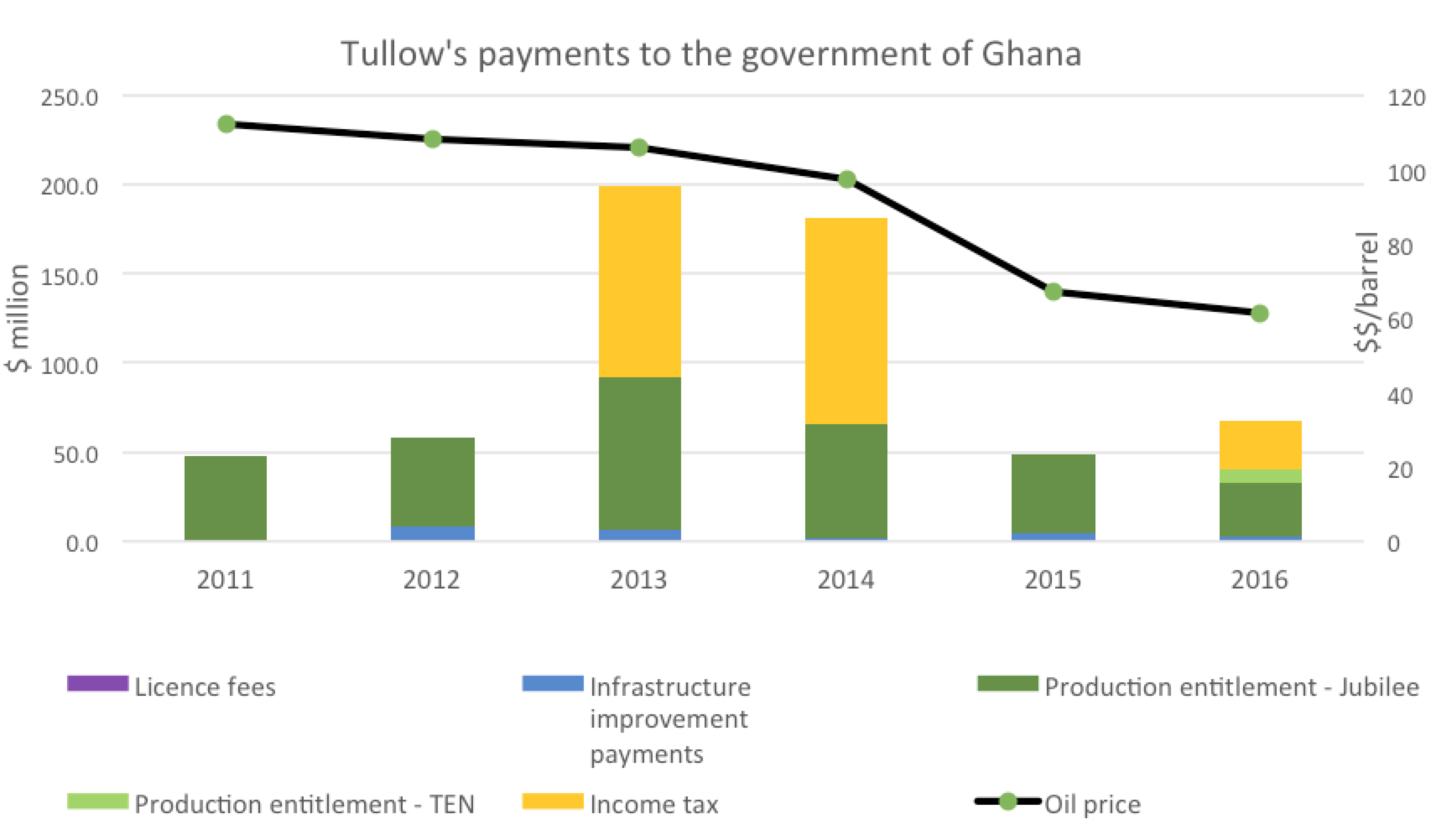 The good news for Ghanaians is that Tullow’s latest disclosure indicates deductions from TEN may have plateaued. Despite oil prices remaining low last year, Tullow reported some, albeit more modest, corporate tax payments in 2016. This indicates Ghana’s oil fields can remain profitable in the current environment and with reduced cost deductions, a relatively larger share of oil proceeds can accrue to the government.

But reasons for caution remain. Jubilee’s offshore platform is undergoing another round of costly repairs. Further TEN investment may come, hinging on an international tribunal ruling in favor of Ghana on maritime boundaries. The Atuabo Gas Processing Plant is being put to test with recent expansion of gas production, which might lead to additional maintenance costs. These potential further investments, though beneficial in the long-run, could again depress tax payments expected over the next years.

There is often a trade-off in the oil sector between increasing short-term tax revenues and attracting further investment. With the help of Tullow's payment disclosures, we can monitor where Ghana stands.

Data covering Tullow payment disclosures for Ghana from 2011 to 2016 can be found here. Additional payment data is available on ResourceProjects.org.

David Mihalyi is an economic analyst with NRGI.