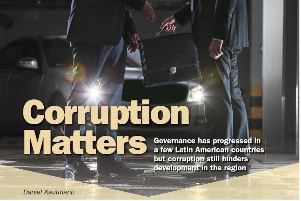 Illicit financial flows from Latin America have totaled roughly $1 trillion over the last decade, and many of the region’s countries have experienced recent, high-profile corruption scandals. While some countries have made progress, the challenge presented by corruption is still vast.

In this article for Finance & Development, NRGI president Daniel Kaufmann outlines the contours of Latin America’s wide, encompassing networks of corruption. Kaufmann posits a somewhat alternative notion of corruption, traditionally defined in terms of individual public officials who abuse public office for private gain. But corruption can also be “legal”, and tends to have a wider reach, he suggests, using analysis based on Latin America. It often involves a network of politicians, organizations, companies, and private individuals colluding to “capture” benefits from access to power, public resources, and policymaking, at the expense of the public good. Kaufmann suggests an alternative view of corruption—“the privatization of public policy.”

Latin America in general has seen progress in macroeconomic management and has largely avoided the major strife and terrorism afflicting countries in other regions. However, the region lags in key dimensions of governance, such as government effectiveness, rule of law and corruption control.

The evidence suggests that resource-rich countries in the region, with some exceptions, are underperforming in these dimensions of governance categories. This matters because the data show that the “development dividend of good governance” is at least as high for resource-rich economies as for other countries. And resource-rich countries in Latin America generally failed to use the abundance provided by the commodity supercycle as an opportunity to reform. The author argues that now, in much leaner times, there is an opportunity for enacting a particular set of governance reforms. The author writes that concrete reforms in rule of law, political finance, and transparency are essential in the region in general, and points to the declining tolerance of its citizens for corruption and impunity. The responsibility for progress doesn’t rest fully with governments: the private sector, civil society, parliaments, judiciary and the media have important and specific roles to fulfill as well. Further, he suggests concrete complementary reforms for resource-rich countries, as well as areas where OECD countries and multinationals need to also do their part.

Copper Giants: Lessons from State-Owned Mining Companies in the DRC and Zambia