Ghana: Initial Assessment of the Impact of the Coronavirus Pandemic on the Extractive Sector and Resource Governance 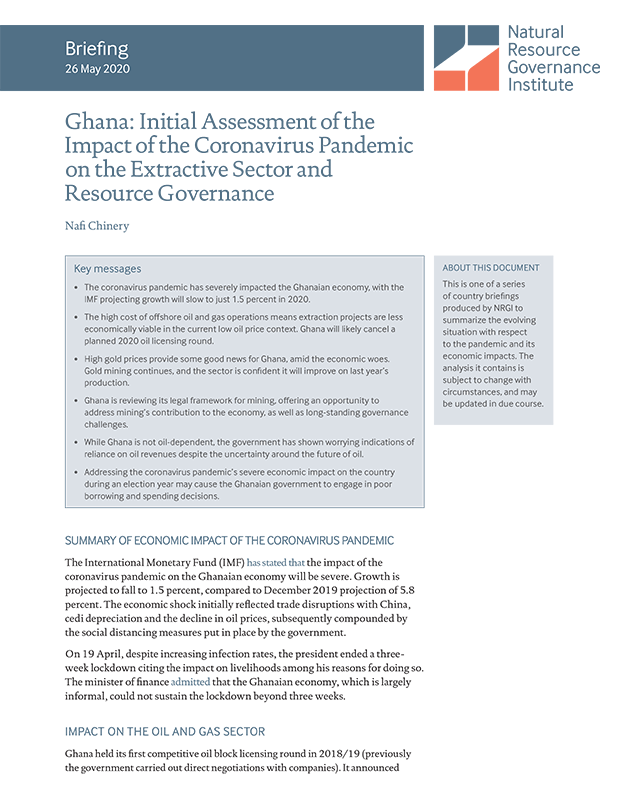 The International Monetary Fund (IMF) has stated that the impact of the coronavirus pandemic on the Ghanaian economy will be severe. Growth is projected to fall to 1.5 percent, compared to December 2019 projection of 5.8 percent. The economic shock initially reflected trade disruptions with China, cedi depreciation and the decline in oil prices, subsequently compounded by the social distancing measures put in place by the government.

On 19 April, despite increasing infection rates, the president ended a three-week lockdown citing the impact on livelihoods among his reasons for doing so. The minister of finance admitted that the Ghanaian economy, which is largely informal, could not sustain the lockdown beyond three weeks.

Ghana held its first competitive oil block licensing round in 2018/19 (previously the government carried out direct negotiations with companies). It announced bid winners in August 2019, but negotiations with companies have already been delayed and the coronavirus pandemic worsened this. Industry sources and sources within the Ministry of Energy have told NRGI that currently there is no strategy for how the negotiations will proceed, even though the fiscal terms were indicated in the bid process. Indications are that the next oil licensing round, which was previously planned to happen this year, will be delayed due to the coronavirus pandemic.

Due to the high cost of offshore oil and gas operations, we expect projects to be less economically viable due to the coronavirus pandemic. Ghana has already seen Aker Energy postpone work offshore in response to the pandemic. The longer-term impacts on Ghana’s oil and gas sector will depend on developments in the global market. Existing production fields are still producing. The pandemic may provide some companies with a basis for force majeure to justify non-performance.

Gold dominates Ghana’s mining sector with a substantial portion of gold mining conducted by small-scale operators. Gold prices have increased by 14 percent since the start of 2020 and there has been no suspension of production in Ghana. According to the Ghana Chamber of Mines, the mining sector is confident it will improve on last year’s production of over 4 million ounces of gold, despite the coronavirus pandemic and its resultant movement restrictions. The CEO of the Ghana Chamber of Mines said this assertion is based on AngloGold Ashanti’s Obuasi Mine coming on stream, a ramp-up by some miners and the strong demand for gold on the international market. Although gold production can continue, wider global travel restrictions are affecting trading, as buyers are mostly based in China and Zurich.

Ghana also has significant reserves of bauxite and has committed significant production to China in exchange for major infrastructure development. However, there are reports of delays in the financing for these projects as a result of the pandemic, and the decline of aluminum prices since January 1 may mean further impacts.

Given the current oil price environment, mining will be more significant for the fiscal position of the country. Successive Ghana EITI reports from 2006 to 2018 show limited mineral revenue for Ghana, given production levels. NRGI research and discussions with government officials suggest that, while the fiscal regime provides fair government take on paper, bloated costs, profit shifting and reinvestments by companies that reduce dividends on state equity may weaken revenue collection. Oil production started in December 2010, and as of 2013 oil revenues surpassed mining receipts. Improving mining’s contribution to the economy will require cost and profit audits, enforcement of audit findings, and a review of the fiscal regime to enhance real government take by making revenue collection easier. Greater transparency, such as publication of mining contracts, can help in this effort.

According to EITI, the extractive sector contributes 17 percent to government revenues and 67 percent to exports. In relation to oil, Ghana’s budget assumed a 2020 benchmark price of $62.60  per barrel. In a statement to parliament on 30 March 2020 the finance minister predicted a revenue shortfall of GHS 5.679 billion ($1.043 billion, using an exchange rate of 5.423 cedis to $1) relative to earlier projections (the minister’s new figures were based on an average price in 2020 of $30 per barrel). The minister also stated that there would be shortfalls in transfers to the Ghana Stabilization Fund, the Ghana Heritage Fund and the national oil company, Ghana National Petroleum Corporation (GNPC). The Africa Centre for Energy Policy (ACEP), analyzing the minister’s statements, noted that with the drop in transfers to GNPC, the company will have less money for investment and its 2020 program and may have to borrow.

The mining industry accounted for some 6 percent of the country’s GDP in 2018 and minerals made up 38 percent of total exports. Gold remains the leading mineral in terms of revenue generation. As noted above, the Ghana Chamber of Mines, is confident of improving on last year’s production. Thanks in large part to mineral exports, Ghana is unlikely to face a balance-of-payments crisis over the next year.

The government has proposed several policies to address the budget challenges it faces. Some of these have implications for oil revenue management. One proposal is to amend the Petroleum Revenue Management Act (PRMA) to allow the use of the Ghana Heritage Fund (GHF) to support the budget. A second is to use a portion of the Ghana Stabilization Fund (GSF), established to enable Ghana to cope with oil price volatility, to help bridge the overall budget shortfall caused by the coronavirus pandemic. The government would accomplish this by reducing the cap on the GSF from $300 million to $100 million, allowing the transfer of the $200 million for contingency spending. Civil society groups, including NRGI, have raised serious concerns about both proposals because they undermine the GHF and GSF, and could reinforce the government’s past failure to invest in the constitutionally-mandated Contingency Fund which was established to mitigate the impact of unanticipated fiscal imbalances. NRGI continues to advocate for a macroeconomic framework that promotes fiscal sustainability over the long-term and smooths fiscal expenditures to counter boom-bust cycles.

As noted above, the government is proposing changes that affect the governance of extractives. We may also see Ghana contemplating changes to the petroleum fiscal regime to make it more competitive, with the risk that Ghana overcompensates in its concessions and lowers future revenues. Moreover, the government seems ambivalent on its move towards competitive bidding in the oil sector, with a preference for directly negotiated deals, where legal and regulatory requirements for transparency are far weaker compared to competitive bidding, raising concerns about corruption and bad deals.

From a resource governance perspective, revenue mobilization and management will be critical issues. With pressure on government to increase spending to address the impacts of the coronavirus pandemic, particularly in an election year, there are major risks of increased borrowing and poor spending decisions. Effective and accountable management of revenue flows, including managing expectations that drive resource-backed borrowing and debt accumulation, is critical.

Ghana will also need to take steps to prevent an increased dependency on oil and the associated borrowing. While Ghana is not oil-dependent, the government has shown worrying indications of reliance on oil revenues despite the uncertainty around the future of oil.  Efforts to convince the government to implement a national development plan must continue.

It will also be important that Ghana strengthens the contribution of mining to the economy and improves overall governance of this sector. Ghana is currently reviewing its mining sector legal framework, offering an opportunity to review a range of governance issues.

Ghana: Updated Assessment of the Impact of the Coronavirus Pandemic on the Extractive Sector and Resource Governance