Inside NNPC Oil Sales: A Case for Reform in Nigeria 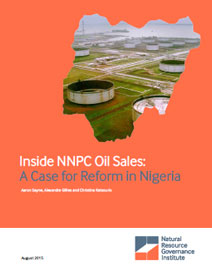 Nigeria's national oil company, the Nigerian National Petroleum Corporation (NNPC), sells around one million barrels of oil a day, or almost half of the country's total production. NNPC oil was worth an estimated $41 billion in 2013, and constitutes the government's largest revenue stream. Early in 2014, Nigeria's central bank governor Lamido Sanusi raised an alarm that $20 billion in NNPC oil sale revenues had gone missing.

This report picks up that story, and offers the first in-depth, independent analysis of how NNPC sells its oil. The main body of the report describes how oil sale practices have worsened since 2010, largely through the expansion (and abuse) of makeshift measures introduced to work around NNPC's fundamental problems. The authors explain why the Buhari government should pursue two tracks of reform. In the near-term, to fix urgent sources of revenue loss, it should:

The report also proposes that a second, more medium-term track of reform is needed before NNPC can begin serving the public interest: the tackling of the corporation's underlying structural problems.

Download the report by section or in its entirety:

Below are several of the primary documents that informed the analysis contained in the report. The report contains full citations for the many other documents we utilized, a number of which (such as NNPC Statistical Bulletins and NEITI reports) are publicly available.