Nigeria: Initial Assessment of the Impact of the Coronavirus Pandemic on the Extractive Sector and Resource Governance 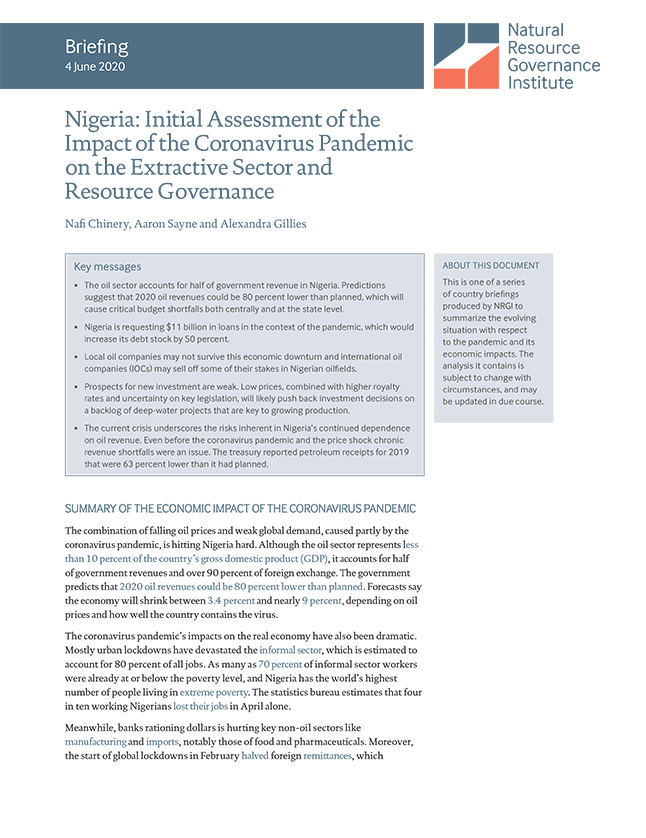 Summary of the economic impact of the coronavirus pandemic

The combination of falling oil prices and weak global demand, caused partly by the coronavirus pandemic, is hitting Nigeria hard. Although the oil sector represents less than 10 percent of the country's gross domestic product (GDP), it accounts for half of government revenues and over 90 percent of foreign exchange. The government predicts that 2020 oil revenues could be 80 percent lower than planned. Forecasts say the economy will shrink between 3.4 percent and nearly 9 percent, depending on oil prices and how well the country contains the virus.

The coronavirus pandemic’s impacts on the real economy have also been dramatic. Mostly urban lockdowns have devastated the informal sector, which is estimated to account for 80 percent of all jobs. As many as 70 percent of informal sector workers were already at or below the poverty level, and Nigeria has the world’s highest number of people living in extreme poverty. The statistics bureau estimates that four in ten working Nigerians lost their jobs in April alone.

Meanwhile, banks rationing dollars is hurting key non-oil sectors like manufacturing and imports, notably those of food and pharmaceuticals. Moreover, the start of global lockdowns in February halved foreign remittances, which previously gave local businesses far more capital than did oil. In 2018, for example, the one-plus million Nigerians living abroad remitted an estimated $23.6 billion—an amount equal to 6 percent of GDP, 80 percent of the federal budget and 11 times all foreign direct investment that year, including from oil.

Nigeria is not well prepared to cope with this crisis. The government passed a series of record-breaking budgets after the 2014 oil price collapse and borrowed heavily to finance a growing deficit. Debt service already consumes over half of government revenue and most fiscal buffers are depleted. In April, Nigerian officials told the International Monetary Fund (IMF) that the country faced an external financing gap of $14 billion. Many of its 36 state governments are insolvent as well.

In May, the National Assembly amended the 2020 budget, lowering the benchmark oil price by almost two thirds. The government is seeking $11 billion in fresh loans from the IMF, domestic banks, the World Bank and others that would grow the debt stock by close to another 50 percent. There are also plans to harmonize exchange rates, further devalue the naira and draw down smaller oil revenue savings accounts, including the sovereign wealth fund’s stabilization fund.

To help meet basic household needs, the government has distributed small cash payments and food to a limited number of mainly urban households. Food banks, places of worship, communities and crowdsourced donations have attempted to fill the gap. In May, the government announced a stimulus package that promises loans for households, small- and medium-sized enterprises (SMEs) and various non-oil sectors.

The presidency has set up several committees and task forces to explore ideas for managing the crisis, but they are either still deliberating or have not gained traction. On 17 April, the president’s chief of staff, Abba Kyari, died from the virus, which has presented a significant challenge to Nigeria’s response to the pandemic given the scope of Mr. Kyari’s influence on economic matters.

Low oil demand and prices caused partly by the coronavirus pandemic are putting heaving pressure on the sector’s outputs and economic fundamentals. At a central bank meeting in March, the head of the Nigerian National Petroleum Corporation (NNPC) stated that low prices meant that Nigeria had 50 cargos of oil and 12 of LNG that could not find buyers. The next month, the country promised to cut production by nearly a quarter under an Organization of Petroleum Exporting Countries (OPEC) agreement that looks likely to be extended. The IMF forecasts that total oil and gas exports will decline by at least $26.5 billion this year.

The Buhari government’s response has prioritized trimming costs. NNPC for instance says it is pressing its upstream partners to reduce their production costs and is rolling back operations at its underperforming refineries. At the same time, the government is fixing retail gasoline prices above NNPC’s import costs and trying to restart private gasoline imports.

Prospects for new investment are weak. The current low prices, combined with higher royalty rates and non-passage of the Petroleum Industry Bill (PIB), will likely push back investment decisions on a backlog of deep-water projects that are key to growing production. After officials expressed doubts about a major oil license round, in June, the Department of Petroleum Resources opened bidding for 57 marginal oil fields that have small to no proven reserves.

The local firms that now produce around a fifth of Nigeria’s oil are more vulnerable to shocks than are the IOCs. Some may not survive without further government bailouts. A few IOCs have announced plans to sell their Nigerian assets, and others could follow as they consolidate their portfolios in the wake of the oil price drop and wider global economic slowdown. Which raises the longer-term questions: which actors will have the incentive and ability to keep investing in the sector, and what new concessions will Nigeria end up making to hold output even at current levels? Companies are already petitioning the government not to enforce last year’s legislation that increased offshore royalties.

To date, the coronavirus pandemic has not had any major impact on the resource governance agenda in Nigeria, which has long faced serious challenges. Movement restrictions are making it harder for civil society actors to do their normal work and there may be delays reconstituting Nigeria’s EITI multi-stakeholder group, which dissolved in February. The PIB’s chances of progressing remain mixed.

The current crisis does throw some of Nigeria’s resource governance challenges into sharper relief, including NNPC’s practice of withholding billions of dollars a year in oil and fuel sale proceeds , which has been a long-standing challenge. The sector is in need of reform, as this money could help address the current crisis.

The current crisis underscores the high costs of Nigeria’s continued dependence on oil revenue. Even before the coronavirus pandemic and the price shock hit, the sector was stuck in a cycle of high uncertainty, boom-bust spending and diminishing returns. Production was mostly stagnant and budgeted oil revenues chronically underperformed. Already for 2019, before the crisis, treasury receipts from petroleum were 63 percent lower than planned. Simple demographics also show that more oil money is not the solution to Nigeria’s huge socioeconomic challenges: assuming a population of 195 million, total oil revenues for 2018, when prices were much higher, were just $93 per person.

Against these hard realities, NNPC says it is committed to increasing production. It wants to build housing, power stations and a dozen new hospitals when much of its existing infrastructure is in disrepair. An overhaul of the oil revenue collection system looks unlikely, as citizens face the worst economic recession in 30 years. In the end, Nigeria’s only way out of oil dependence’s recurring destruction may be to plan a managed oil sector decline that allows the country to see a future for itself after oil.

Nigeria: Updated Assessment of the Impact of the Coronavirus Pandemic on the Extractive Sector and Resource Governance