In Pursuit of Transparent Trading 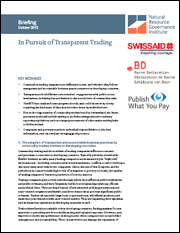 Trading companies play several roles through which they influence public institutions and public revenues, and they frequently build close relationships with top officials and political elites. They are major buyers of raw materials sold by governments and state-owned companies worldwide, and these transactions generate significant public revenues. Traders also provide large loans to governments, sell refined products, and enter into joint ventures with state-owned entities. They are expanding their upstream and downstream operations in developing countries as well.

Traders therefore play a valuable role in developing countries, finding markets for raw materials or providing much-needed financing and logistical expertise. However, past experience shows that governance challenges arise when companies do not prioritize transparency and accountability. These controversies can damage the reputation of trading companies with investors, and can create problems in host countries. For instance, in the absence of full reporting and clear regulatory guidelines, traders have faced critical questions about whether they do business with politically exposed persons. Alarms have also been raised by suspicious payments, such as commissions to government advisors paid by trading company representatives seeking new business opportunities. Often, such payments go through complicated webs of offshore companies, which make it challenging for authorities to trace the funds.

Along with helping to guard against corruption and the abuse of power by public officials, transparency can facilitate accountability in resource-rich countries. Citizens, journalists, parliamentarians and other oversight actors need access to information about their country’s public finances, including the deals that their government signs with trading companies. Transparency facilitates oversight and discourages self-dealing by public officials. From a competition perspective, it also levels the playing field, which creates a more stable business environment.