Guinea’s Ministry of Mines and Geology (MMG) has just released an updated, expanded mining contracts portal. This is the latest milestone in a multi-year journey toward better and more complete online disclosure of agreements critical to the country’s development. The new portal provides improved features and allows trained staff to publish new contracts allowing for improved suitability.

Guinea has taken a number of positive steps toward resource transparency and good governance since President Alpha Condé committed to mining reform in his 2010 electoral manifesto and the country passed the 2011 Mining Code.

Since then, the Natural Resource Governance Institute and its partners used a similar technology to create a global database of extractives contracts, ResourceContracts.org.

In September 2017, Guinea’s minister of mines and geology decided to upgrade the Guinean contracts website and to add all conventions signed since 2013. Formally launched in French and English on 26 February 2018, the upgraded site provides an open data platform of disclosed mining contracts and supporting documents. The contract portal is directly accessible from the MMG website and complements existing transparency initiatives in Guinea’s mining sector. The portal promotes systematic resource contract disclosure recommended by the Extractive Industries Transparency Initiative (EITI) Standard. 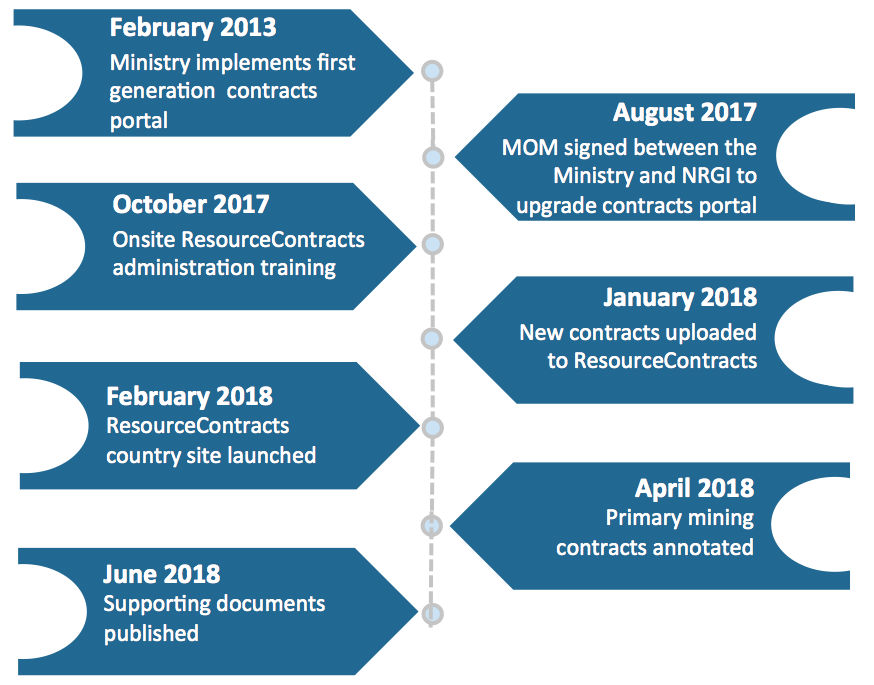 There is a broad drive from Guinea stakeholders to improve extractive sector transparency. In September 2016, the Centre for Mining Promotion and Development implemented a mining cadaster system, which includes a public-facing license portal. In October 2017, the National Office of Petroleum published contracts online. And in November 2017, La Société Guinéenne du Patrimoine Minier also updated its website to align with best international practices and EITI guidelines.

NRGI has developed new extractive data platforms during 2017 specifically related to mandatory disclosure data. For Guinea, mandatory disclosure data covers payments from Tullow Oil, Rio Tinto and Nordgold, among others. This data now provides oversight actors the opportunity to establish, for example, whether fiscal terms from contracts lead to actual payments by companies to governments.

Without the disclosure of contracts, citizens cannot assess possible risks, monitor obligations effectively or hold governments and companies to account. However, mining contracts can be complex. NRGI plans to engage with civil society organizations around the monitoring of contracts.

In April 2016, the contract review committee completed its assessment of all 19 mining projects, titles and agreements. The government should release the final report of the process and all of the revised agreements with companies on the MMG website to fulfill the commitment made at the outset of the review process to allow Guinean citizens to see for themselves the results of this review.

The ResourceContracts platform is an online repository of oil, gas and mining contracts developed in partnership between the World Bank, the Natural Resource Governance Institute and the Columbia Center on Sustainable Investment. The site enables civil society organizations, members of affected communities, government officials, researchers, and other stakeholders to search for contracts; view summaries of contracts’ key environmental, social, operational and fiscal provisions; and download full contracts as open data. The site relaunched in 2015 with new features and contracts.

The partners behind ResourceContracts.org continue to work with governments and country level EITI offices to publish extractives contracts as open data. ResourceContracts.org country sites have been implemented for Guinea (2013 and 2017), the Philippines (2015), Sierra Leone (2016), Tunisia (2017) and the Democratic Republic of the Congo (2017).