Tanzania passed sweeping new laws for its extractives sector in 2017 with the objective of getting a larger share of the benefits from its mineral and gas deposits. Among other significant changes, these laws increased taxation of the mining sector.

Setting taxes at a level that maximizes revenues is challenging for any government and Tanzania is no exception. Set them too low and the government misses out on much-needed funds for its ambitious development agenda while foreign-owned companies make excessive profits. Set them too high and the country risks reducing investment and therefore the sector’s revenue-generating potential, as well as potentially encouraging tax evasion. Last week, President John Magufuli highlighted the difficulties in getting this balance right. At a multi-stakeholder meeting concerning the mining sector, he stated his government’s intention to review the 2017 fiscal regime given his concern that the recent increase in taxes is hindering rather than helping efforts to collect more revenue from the sector. While the media focused on his comments on artisanal and small-scale mining and tax evasion, the president also spoke about the impact of the new regime on large-scale investment.

NRGI’s preliminary analysis of the current fiscal regime for Tanzania’s mining sector suggests that the president is right to be concerned. Using an Excel-based economic model that we developed specifically for this analysis (similar to other models we have recently published), we evaluated the impact of the regime on a number of hypothetical large-scale gold projects (ranging from mines as large as Acacia’s North Mara mine to small ones like Shanta Gold’s New Luika mine).

We focused on the implications for new projects; since contracts for existing projects are not in the public domain, it is difficult to assess the impact of renegotiating them. As the figure below illustrates, the government may have been right to increase taxes in 2017: the previous regime taxed projects less than the regimes of some gold mining countries that we measured. However, the fiscal regime now places a significantly larger tax burden on projects than these other countries. The tax mix, with high royalties and limited value added tax refunds, mean that this difference is even greater for less profitable mines.

Average effective tax rate from a gold project with development costs of USD 420 million, per unit operating costs of $600 per ounce and a gold price of $1,300 per ounce* 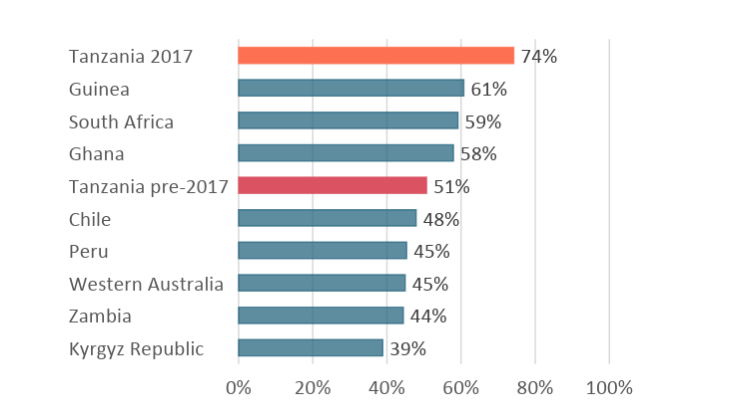 * Based on a 10 percent discount rate, assuming that the government continues to treat gold doré as a “raw mineral” and therefore not eligible for VAT refunds.

The fiscal regime is not the only factor that will determine whether investors are interested in Tanzania. A country’s geological potential, political stability and regulatory environment often have a greater impact on investment decisions. Improvements to the wider business climate could therefore make the country’s higher taxes less of an obstacle to investment. However, as things stand, the current fiscal regime is likely to limit mining sector activity and ultimately constrain government revenues.

We have already discussed this analysis with a number of stakeholders in Tanzania, including the parliament. On the basis of these discussions, we are in the process of developing options for revising the fiscal regime. While these options primarily address the president’s concern about the tax burden’s impact on investment, they also account for other priorities that the government has (such as limiting its exposure to tax avoidance risks). These options and the accompanying economic model should inform efforts to find a more balanced fiscal regime that enables Tanzania to fully harness its mineral wealth for the benefit of its citizens.

How Tanzania Can Secure a Good Deal for its Offshore Gas