Major enhancements of the global norms governing transparency in natural resources are afoot. As the Extractive Industries Transparency Initiative (EITI) international board meeting in Kyiv concludes today, board members representing governments, companies and civil society actors have just broadly agreed upon historic revisions to the EITI Standard, which sets out norms for the disclosure of oil, gas and mining data and is implemented by over 50 countries. The revised EITI Standard now being finalized will be ratified at the EITI Global Conference in June.

In the run-up to Kyiv, we at NRGI have been doing analytical work, advocating and negotiating for improvements on several important issues, each detailed below. Our efforts on many of these topics have been underway for several years, working alongside partner organizations like Publish What You Pay, the EITI International Secretariat, Oxfam, Global Witness, and numerous civil society organizations and government reformers in the resource-rich countries where we work. 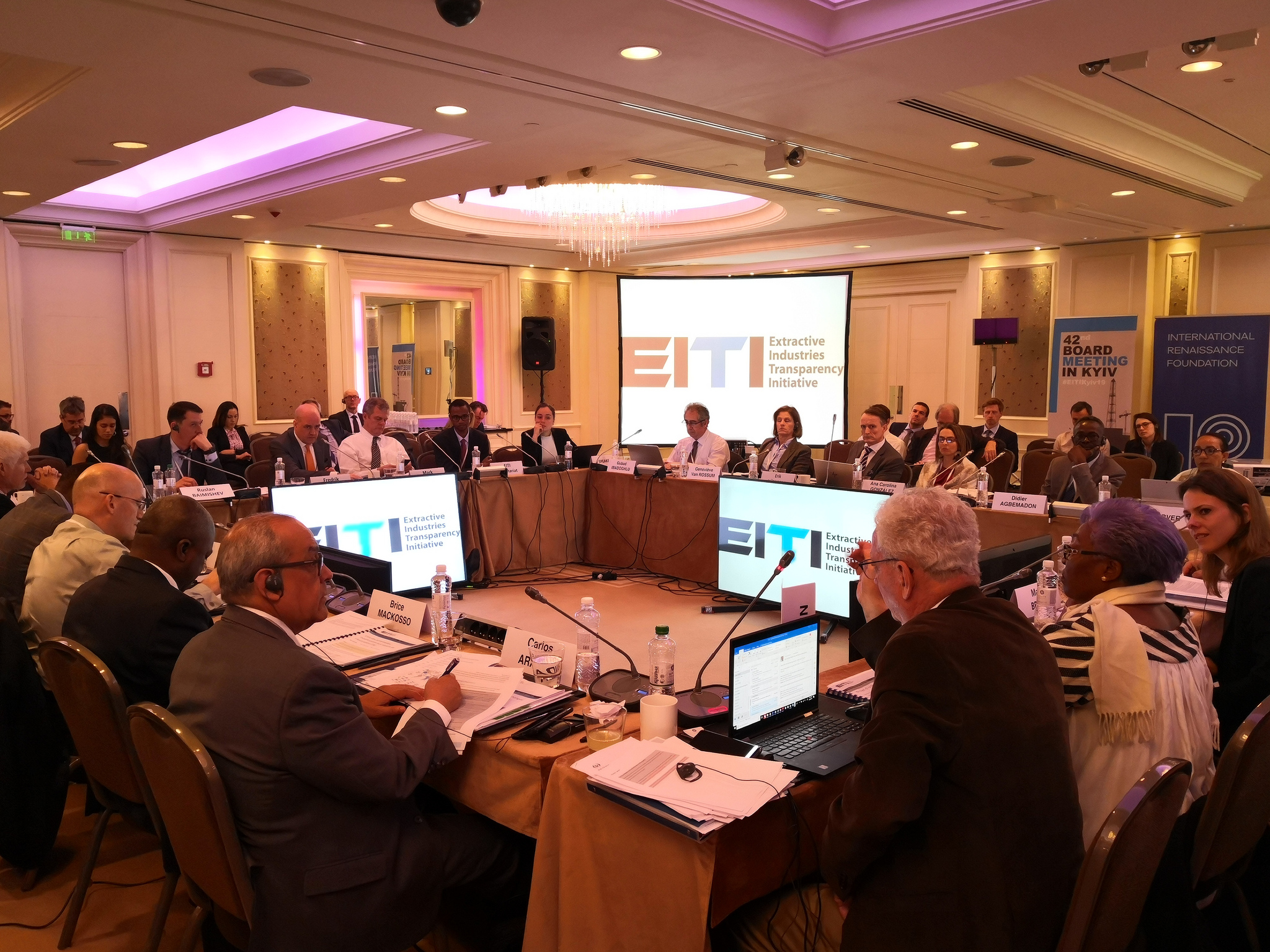 The true impact of these revisions will depend on the strength of their implementation among the governments, companies, and civil society actors that lead EITI processes, and on whether the new information unlocked by these improvements is actually used to inform stronger policy-making on natural resources.

The EITI Standard will now require the publication of contracts and licenses that are granted, entered into or amended from 1 January 2021. The initiative continues to encourage disclosure of all contracts and licenses, regardless of when signed. Contracts and licenses are vitally important documents that lie at the heart of the legal framework governing extractive processes, and are therefore at the core of EITI reporting. Thirty-one of 51 EITI implementing countries have already disclosed at least some contracts and 24 already have laws requiring disclosure. The practice is also required by the IFC, MIGA and EBRD; and has been endorsed by the IMF, UN, International Bar Association, the B-Team, the OECD the ICMM and IPIECA. By joining ranks with these leading institutions, EITI has taken a major step forward and comes into alignment with global norms.

After several years of stagnation, the EITI’s project-level reporting requirement will now be proactively implemented by companies and governments. The EITI Standard will now provide clarity around the precise definition of “project” that all EITI countries will use for reporting on fiscal years ending on or after 31 December 2018. This form of reporting provides critical and relevant information to local communities, governments and investors, and enables companies to demonstrate their economic contributions in relation to specific projects and affected communities. EITI’s new definition of “project” will be based on the contract or other legal agreement between a government and company, as recently endorsed by the IMF as a global norm. Helpfully, the definition will also be in line with the European Union’s extractives transparency law (Chapter 10 of the EU Accounting Directive), which will facilitate harmonization across payment disclosures. Through such mandatory disclosure laws in the European Union, Canada and Norway extractive companies have already reported on over USD 500 billion at the project level around the world. Today’s board decision will lead to a huge increase in project-level data and ensure that companies will report such data across the 51 EITI countries. It is now essential that key countries such as Australia and the United States (neither of which implements the EITI Standard or mandatory disclosure laws) get on board with this form of reporting.

The EITI Standard will now require companies to disclose material payments to governments that are related to the environment and are mandated by law, regulation or contract. The standard will also encourage implementing countries to disclose information on the management and monitoring of environmental impacts of extraction.

Environmental issues are central to meaningful public debates on natural resource governance. Given that the purpose of EITI is to help facilitate and inform such debates in implementing countries, these new disclosures represent critical improvements to the EITI Standard. Prior to this week’s agreement, the EITI Standard did not include any reference to the environment. However, over half of EITI countries have already included environmental issues as part of their EITI reporting. These new revisions will help increase levels of environmental information available to accountability actors in resource-rich countries.

The EITI Standard will now require employment data disclosures to be disaggregated by gender and, when available, by company and occupational level. For extractives to benefit everyone, it is essential that everyone involved more proactively consider how extraction and good resource governance can result in gender equity. In that vein, the EITI Standard now also requires constituencies to consider gender when selecting participants to their national multi-stakeholder group and when planning how to disseminate their data. With these groundbreaking measures, the EITI standard has set a minimum expectation of gender integration while also leaving room for countries to continue to innovate on ways to incorporate gender into their national EITI implementation to ensure that everyone can benefit from extraction.

The sale of oil, gas and minerals by governments and state-owned enterprises (SOEs) to commodity traders is a critical source of income—in Nigeria and Iraq, for example, these sales constitute the governments’ largest revenue source. At the same time, these commodity sales are often opaque and prone to corruption and mismanagement. Revisions to the EITI Standard agreed today will shed important new light on these high-value transactions. Crucially, today’s breakthrough on project-level reporting will also be applied to the sale of commodities, meaning that disclosure must take place at the level of the sales contract entered into between a trading company and the government (or the SOE) selling the commodity. The EITI board also decided that final language tackling the important issue of sale-by-sale disclosure still needs to be agreed.

The new revisions on trading also include important new encouragements in the EITI standard related to the role of state-appointed marketing companies, resource-backed loans, product swap arrangements, the process for selecting buyers and disclosure of the sales agreements themselves. While the revisions agreed fall short of requiring trading companies themselves to disclose (the board agreed only to encourage traders to disclose, while it is a requirement for governments and SOEs to do so), a number of companies including Trafigura and Glencore have begun to unilaterally disclose their payments to purchase commodities, and the governments of major trading hubs including the U.K. and Switzerland have resolved to improve company transparency in this area through work at the OECD. Given their size, it is also clear that these transactions should be included in existing mandatory payment disclosure laws, an approach which has also been endorsed by the IMF.

The revisions to the EITI Standard will also include improvements on a number of other critical issues. The standard will require disclosing entities to disaggregate production and export data at the company and project level. The revisions also include major improvements regarding state-owned enterprises (SOEs). The current requirement that EITI reports include an explanation of the role of and rules governing SOEs in the sector will now need to include disclosures of transfers, retained earnings, reinvestment and third-party financing related to SOE joint ventures and subsidiaries. SOEs will now be expected to publicly disclose their audited financial statements. And EITI countries will be encouraged to describe the rules and practices related to SOEs’ operating and capital expenditures, procurement, subcontracting and corporate governance. On open data, the standard will now require implementing countries to complete summary data files for each fiscal year, and essential step towards facilitating accurate use of EITI data.

The EITI itself still has room to grow. In Kyiv, we signaled that broader transparency regarding climate risks and energy transition issues, as well as increased focus on anticorruption and state capture in EITI’s principles and norms would be central to the initiative’s strategic direction and future policy relevance. The new EITI Standard will be ratified in June along with the installation of a new EITI board. These issues will represent important topics for future consideration by that newly constituted body, as the EITI charts its next steps.