Are you researching a resource-rich country and in need of data to quantify the government’s dependence on revenues from natural resources? Looking for a dataset to analyze global trends in revenues accumulated from oil, gas and minerals?

If so, NRGI’s Natural Resource Revenue Dataset is for you. Better yet, the December 2019 update is now available at www.resourcedata.org/dataset/natural-resource-revenue-dataset .

Has anything changed in this update?

We have seen some progress in total resource revenue data availability in the last two years since we started collating this dataset. Country coverage is rising, in that data points are now available for some countries that there was previously no data for. Since we began two years ago, there are two RGI countries where coverage is now present where it was not before. Myanmar supplied data by completing relatively timely EITI reporting and general government resource revenue data became available for Morocco in the ICTD/UNU-WIDER dataset. But, crucially, there remains no data for very resource-dependent economies such as Uzbekistan and Zimbabwe. Data is also absent for countries with large populations such as Bangladesh, Brazil and India.

The positive development of slightly increased country coverage is somewhat held back by lagged data. There are not any countries that have data available for 2018 and in 2017 data available for just 16 countries. Indeed, the peak year for volum of data remains at 2014– exactly as it was when we blogged about this subject two years ago. In large part, this is a result of 2014 being the last year in which the IMF published its World Commodity Exporter’s Database (WCED), which includes the indicator “general government commodity revenues, percent of GDP.” For the most part, the ICTD/UNU-WIDER dataset uses IMF country reports, but their coverage is not as large as the IMF WCED reporting. In addition, there remains a timing disconnect between the EITI report publication and the open data publication.

This chart shows country coverage in the dataset over time for all countries available in the three sources: 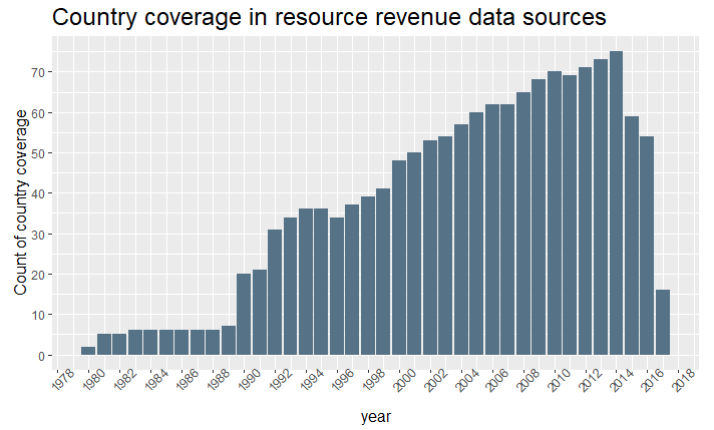 Since 2000, the aggregated global government revenue from natural resources that we collate in our dataset amounts to USD 15 trillion. (This figure takes the mean across sources when more than one source is available for a country.) While it is not possible to provide trend over time analysis, it is interesting to note the rate of accumulation of data. At the May 2019 publication of the dataset, the global aggregated total was $14.7 trillion. That’s $300 billion more traceable government revenues from extractives in just over six months. 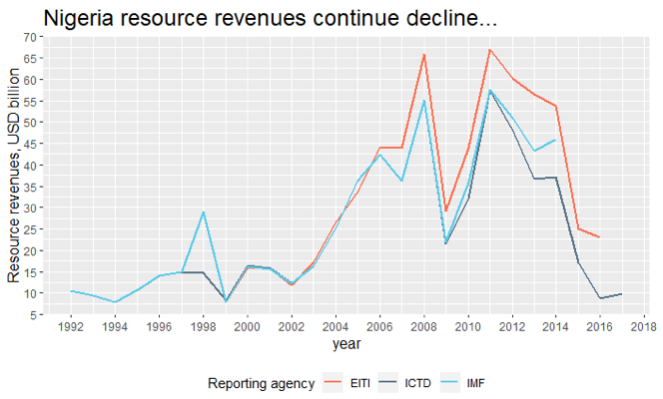 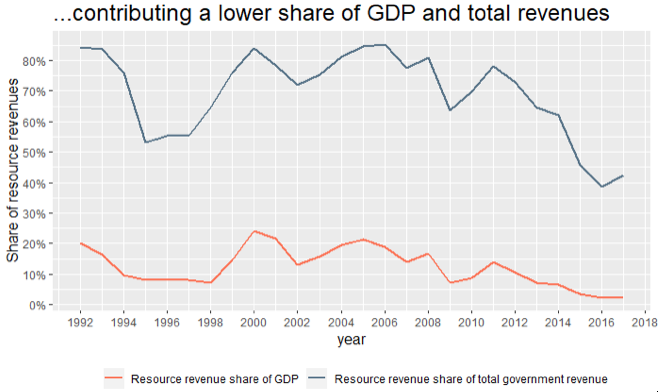 Background of the resource revenues dataset

Just over two years ago, we published this blog post on our experience gathering data on the revenues governments receive from their natural resources sectors. We assembled enough data to conclude that in 2014, governments with unsatisfactory governance measured in the 2017 Resource Governance Index (RGI) (i.e., weak, poor or failing scores) raised over USD 1.2 trillion in revenue from natural resources.

We will continue to update the dataset every quarter and to track the availability of resource revenue data for our own work. We welcome requests for off-calendar updates. If you are engaging with the data and have questions or queries, please don’t hesitate to get in touch with us via the contact details available here.

Anna Fleming is a research and data officer at the Natural Resource Governance Institute (NRGI).