Why is Venezuela’s Oil Sector So Shattered?

For oil-dependent Venezuela, the drop in oil prices since 2014 has been hard. Combined with the collapse in production, it has created an unprecedented economic crisis.

Output decreased by 337,000 barrels per day (bpd) between December 2015 and December 2016 to 2.27 million bpd, according to figures Venezuela’s government provided to OPEC. This is more than other OPEC countries over the same period and is on par with Nigeria. This follows a 359,000 bpd cut between 2005 and 2012.

Why has the industry crisis been so severe in Venezuela? I address the question at length with my colleague Francisco Monaldi in a recent working paper for the Center for International Development at Harvard University. Here are a few insights from our analysis.

Financially, state-owned oil company PDVSA—which controls upstream activities directly or through tightly controlled joint ventures with private companies—is losing on all fronts: it is missing out on revenue collection and it is spending its shrinking budget on noncore activities, Meanwhile, production costs in Venezuela have increased.

PDVSA is losing a quarter of its revenue to fuel subsidies, oil imports and shipments of oil that do not generate revenues for the company:

The deviation of resources into general public expenditures, such as development funds and social spending, limits PDVSA’s ability to invest in exploration, production and maintenance. The extent of this deviation is unclear given inconsistent government statements. The table below shows that the difference between what PDVSA reports for social program spending in its financial statements and in its annual report is as large as USD 90 billion for the cumulative period between 2010 and 2015.

Source: Hernández and Monaldi, Weathering Collapse: An Assessment of the Financial and Operational Situation of the Venezuelan Oil Industry.

Moreover, there are several factors affecting the cost structure of petroleum projects: geological constraints, taxes, the exchange rate, the lack of infrastructure for crude transport and financing costs. Developing extra-heavy crude oil, which constitutes most of the country’s remaining reserves, is costlier than lighter crudes. It requires particular infrastructure, technology and skilled labor that Venezuela lacks. Extra-heavy oil must also be blended with lighter crudes to meet refinery requirements. A lack of locally sourced light crude has forced PDVSA to import light crude oil from the United States.

Successive modifications in the hydrocarbons law have produced the current tax structure. These changes increased royalties and income taxes, and introduced other contributions. Gross taxes now account for almost 40 percent of the total cost of oil projects, higher than any other major oil producer but Russia. (See figure below.)

Production costs are also highly sensitive to inflation, as the currency is pegged to the dollar. Accelerating inflation levels and the government’s policy in maintaining a fixed exchange rate have led to a large real appreciation of the exchange rate. This has led to higher domestic costs for PDVSA and its joint venture partners. 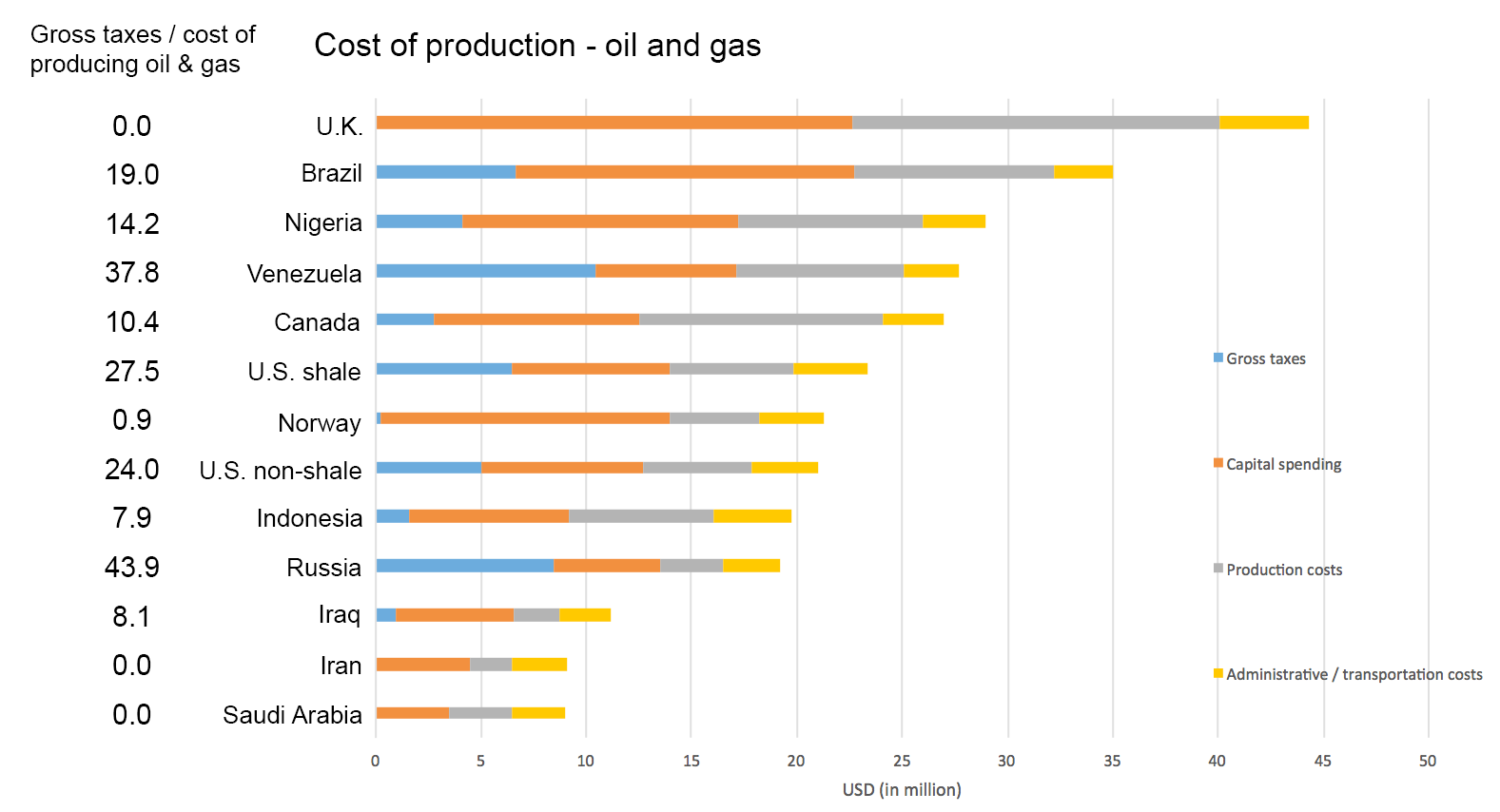 PDVSA’s cash-flow constraints led it to resort to direct financing from the central bank to cover local expenses and increase its debt from less than USD 3 billion in 2006 to almost USD 41 billion in 2016. Central Bank financing has led to an exponential increase in money supply and has been a direct cause of the rapid acceleration in prices. PDVSA has also delayed payments to suppliers, which led to a halt in activities from contractors such as Schlumberger, Halliburton and Baker Hughes. This has accelerated recent production declines.

PDVSA’s response to its financing crisis is short term in nature. It transformed debt to suppliers into financial debt, agreed on direct payments in kind to some creditors, emitted costly bond swaps and used overseas assets as collateral for mortgages. This combination means that PDVSA is further reducing its future cash flows and could end up losing valuable assets to creditors.

PDVSA is also facing tremendous operational challenges, including basic ones like a shortage of inputs and access to electricity. There is a lack of skilled labor, particularly since the massive layoff of expert technical and management personnel in 2003. Safety, environmental and security risks are concerning as well.

Companies engaged in joint ventures with PDVSA have expressed concern at the high concentration of decision-making power inside the company and at the discretional use of financial resources that lead to project execution delays and additional operational risks.

All of these considerations are reflected in a recent survey by the Fraser Institute. The study places Venezuela at the bottom of a global ranking of jurisdictions attractive for petroleum investments. Lack of a solid institutional framework and increasing uncertainty regarding future political developments have not helped.

Profound reform of Venezuela’s oil industry is urgent. But in a country so dependent on oil exports, any attempt to improve the operations of the oil sector would have to address the distribution of oil rents, the quality of public institutions and the governance of PDVSA.

A Nationalization Misstep in Venezuela?