Colombia: Initial Assessment of the Impact of the Coronavirus Pandemic on the Extractive Sector and Resource Governance 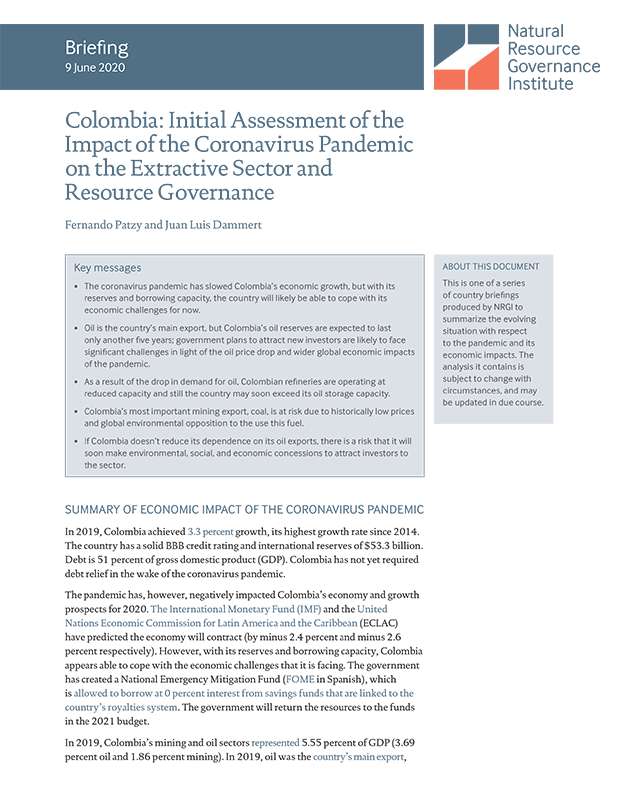 In 2019, Colombia achieved 3.3 percent growth, its highest growth rate since 2014. The country has a solid BBB credit rating and international reserves of $53.3 billion. Debt is 51 percent of gross domestic product (GDP). Colombia has not yet required debt relief in the wake of the coronavirus pandemic.

The pandemic has, however, negatively impacted Colombia’s economy and growth prospects for 2020. The International Monetary Fund (IMF) and the United Nations Economic Commission for Latin America and the Caribbean (ECLAC) have predicted the economy will contract (by minus 2.4 percent and minus 2.6 percent respectively). However, with its reserves and borrowing capacity, Colombia appears able to cope with the economic challenges that it is facing. The government has created a National Emergency Mitigation Fund (FOME in Spanish), which is allowed to borrow at 0 percent interest from savings funds that are linked to the country’s royalties system. The government will return the resources to the funds in the 2021 budget.

The national oil company, Ecopetrol (88 percent state-owned; 12 percent private), produces 60 percent of the country’s oil. Approximately 38 private companies the remainder. The drop in demand for oil has meant that Colombian refineries, for which Ecopetrol is also responsible, are operating at significantly reduced capacity and that storage capacity is being depleted.

Colombia's oil reserves are in rapid decline and are expected to last less than five years. Given the significant role that oil plays in its economy, Colombia wants to increase reserves by attracting foreign investment to explore and exploit conventional and offshore fields. Colombia also wants to start exploiting unconventional reserves through fracking. However, there is significant resistance from the public, and so far, the fracking agenda has not made progress.

With reference to the first strategy (attracting new investment), Colombia had planned two bidding rounds for 2020. The first was for high-potential land and marine areas and the second for an auction of mature areas ceded by Ecopetrol. The first round pre-qualified 29 companies. These companies were due to make bid offers in May. There is concern that the coronavirus pandemic may have negatively impacted the interest and financial position of the investors. The regulator, Agencia Nacional de Hidrocarburos (ANH), has announced that it will modify the terms and is studying the introduction of incentives to maintain the interest of the pre-qualified companies. The exploration of unconventional reserves is not feasible under current price conditions due to the high costs of such extraction.

The country produces mainly coal and gold in addition to nickel and emeralds. The government has exempted mining operations from lockdown. The large coal mining operations of La Guajira and Cesar have reduced their activities, however, to mitigate the expansion of the coronavirus. In contrast, gold mining continues, mainly in Antioquia, possibly due to high gold prices.

A group of prominent businesspeople from various sectors (including the presidents of Anglo Gold Ashanti and the guild of large mining companies, Asociacion Colombiana de Mineria (ACM)), have asked President Iván Duque for help in dealing with the crisis. Their demands include temporary suspension of value added tax and permanent reduction of income tax. Specifically, for the extractive sector, they have asked for abbreviated procedures for some issues, such as prior consultation and environmental licenses. The government has not yet responded.

Colombia’s guild of oil companies, Asociacion Colombiana de Petroleo (ACP), has stated that if the price of oil (Brent) remained at $25 per barrel for the rest of the year, it would reduce production by 100,000 bpd, representing the closure of at least 390 wells and a fall in annual production of 12 percent. In fiscal terms, this would mean that royalties collected from Ecopetrol and private companies would drop from $4 billion in 2019 to $1 billion in 2020.

In 2019, Ecopetrol achieved an excellent level of profits that represented approximately $2.3 billion in dividends to the Colombian state. In the first quarter of 2020, Ecopetrol made a net profit of $34.2 million, a 95 percent drop compared to the same period in 2019.

ACP has asked the government to reduce the rates for transporting crude oil by pipeline to mitigate the impacts of the oil price drop. The proportion of transportation costs in the production cost per barrel is significant. The regulatory agency is considering reducing the transportation fee, which would have an additional impact on Ecopetrol's profits because it controls 80 percent of the pipelines.

An additional extractive revenue issue to consider is that a constitutional reform approved last year modifies the allocation of oil, gas and mining royalties, mainly to favor the producing territories. One of the consequences is a reduction in the allocation to the Savings and Stabilization Fund (FAE in Spanish, a fund that supports subnational budgets) from 30 percent to 4.5 percent. This is a reduction in savings that benefit all subnational areas in favor of increased revenue for spending by the producing regions. Therefore, the FAE will have significantly fewer resources to face future crises or oil price volatility. During 2020, parliament must approve a law to adapt the royalty system to this constitutional reform. It is currently debating the law.

Overall, in the short term Colombia has the financial capacity to respond to the crisis using savings and—if needed—the fiscal space to borrow so as to be able to cope with the economic shock of the coronavirus pandemic. However, the country will see a significant drop in revenues from extractives in 2020—particularly from the oil sector. Oil price predictions remain uncertain and contested, but there is a potential for longer-term low prices affecting the annual revenues of the country.

There is no perceived setback in terms of sector transparency, and there appears to be no impact on the process of the Extractive Industry Transparency Initiative (EITI), a global organization that publishes annual government- and industry-based transparency reports on the oil, gas and mining sector and makes suggestions about how countries and companies can improve their extractives governance. Overall, the government has been transparent about its actions in relation to the coronavirus pandemic. Entities in charge of control and supervision, such as the attorney general's office and parliament, are fully exercising their functions.

Beyond transparency, oversight actors need to monitor the impacts of the pandemic on social and environmental standards. For example, over the past few months, there has been controversy around proposals to advance online processes for prior consultation with indigenous peoples in the context of the pandemic. This was met with opposition from indigenous and environmental organizations, and the government has changed its position.

Reliance on oil is a major risk for Colombia. The country has limited oil reserves and little recent success with exploration. Unconventional exploitation (fracking), which is both expensive and highly controversial, does not seem a viable alternative, at least in the near-term. The coal industry is also at risk. In a scenario of low prices and phasing out of this source of energy (especially in Europe), we also expect that royalties from coal (second in importance to oil) will decrease.

In this context and given the decline in oil and coal prices, Colombia needs to start thinking seriously about moving away from its reliance on these commodities for domestic income. In the short term, because oil and coal have been important attractors of foreign direct investment, the risk is that in a low price scenario, the government will lower social and environmental standards and make poor deals with investors (the so-called “race to the bottom” effect). In the longer-term, failure to move away from dependency risks serious economic decline.

The Savings and Stabilization Fund (FAE) has just demonstrated its usefulness in providing emergency funds to sustain the fall in subnational budgets, and so the reform of the royalty system, which substantially reduces the allocation of extractive revenues the fund, is being called into question. Finally, Colombia is working on a framework to develop strategic areas for mining, in principle with competitive auctions and higher social and environmental standards. The country expects to further develop its copper and nickel potential, looking ahead at the demand for these minerals in the context of the global energy transition.