Democratic Republic of the Congo (DRC): Initial Assessment of the Impact of the Coronavirus Pandemic on the Extractive Sector and Resource Governance 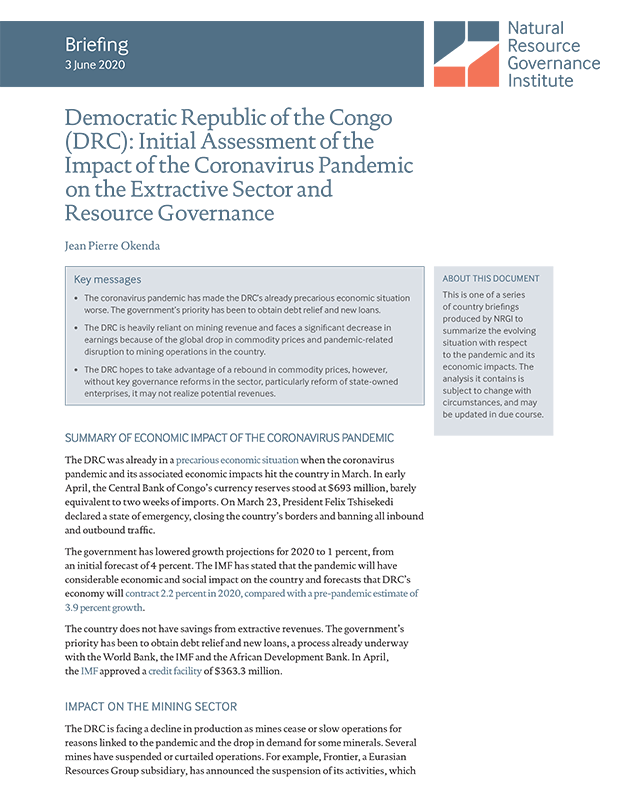 The DRC was already in a precarious economic situation when the coronavirus pandemic and its associated economic impacts hit the country in March. In early April, the Central Bank of Congo’s currency reserves stood at $693 million, barely equivalent to two weeks of imports. On 23 March, President Felix Tshisekedi declared a state of emergency, closing the country's borders and banning all inbound and outbound traffic.

The government has lowered growth projections for 2020 to 1 percent, from an initial forecast of 4 percent. The IMF has stated that the pandemic will have considerable economic and social impact on the country and forecasts that DRC’s economy will contract 2.2 percent in 2020, compared with a pre-pandemic estimate of 3.9 percent growth.

The country does not have savings from extractive revenues. The government’s priority has been to obtain debt relief and new loans, a process already underway with the World Bank, the IMF and the African Development Bank. In April, the IMF approved a credit facility of $363.3 million.

The DRC is facing a decline in production as mines cease or slow operations for reasons linked to the pandemic and the drop in demand for some minerals. Several mines have suspended or curtailed operations. For example, Frontier, a Eurasian Resources Group subsidiary, has announced the suspension of its activities, which could lead to the loss of 1,400 jobs. Several mines have suspended or curtailed operations. According to Reuters, Chemaf, which is a subsidiary of Dubai-based Shalina Resources, has shut its Usoke copper-cobalt processing plant and stopped construction work on its Mutoshi plant in response to the pandemic. Chemaf has also temporarily closed the Mutoshi artisanal cobalt mining site, which supplies commodity trader Trafigura. On 2 April Ivanhoe announced quarantine and lockdown procedures at Kamoa-Kakula and Kipushi and that Kipushi had also temporarily suspended operations. China Molybdenum quarantined its Tenke Fungurume copper and cobalt mine in late March although it is not clear if such measures have reduced production as staff remained locked down on site.

In April the DRC’s minister of mines reported a 12.75 percent increase in copper exports and a 15 percent drop in cobalt exports in the first quarter of 2020, compared to the same period in 2019. He noted that while demand and price would be factors affecting the DRC’s mining sector moving forward, they were not as significant as constraints on production. The minister stated that the mine shutdowns could trigger a “catastrophic” economic and social crisis in the DRC. The minister also acknowledged DRC’s strong dependence on China, in terms of recovery of demand for copper and cobalt, and his view that prices could increase as China’s recovery progressed, but DRC would only benefit if it maintained production.

Mining also faces transport challenges linked to both domestic and international restrictions, which affect exports of minerals and the import or arrival of key mining inputs and specialists. The minister of mines noted the potential negative impact of movement restrictions in South Africa, given Durban is a port from which DRC minerals are shipped to Asia. Glencore’s Katanga Mining has announced delays in the completion of its acid plant, due to “the inability to mobilize necessary commissioning experts to site due to travel and social distancing restrictions.” This delay resulted in the company repatriating more than 300 Indian contractors.

The government is also concerned that depressed copper prices could slow the development of new mines in Congo. However, in May Ivanhoe said the recent events have not affected the development schedule for the Kamoa-Kakula project, and initial production was on track for third quarter of 2021.

The oil sector contributed 11 percent of total extractive revenues in 2017. The country intends to attract investment and increase production but investment will likely be constrained by the low oil prices, reduced demand, and the financial challenges facing oil and gas companies.

DRC is highly dependent on mining for revenues and foreign currency. The mining sector is responsible for some 30 percent of GDP and, according to IMF data, has accounted for more than 90 percent of total exports over the last five years. The government has not yet provided an estimate of the decrease in revenues from the extractive sector. The think tank, Congo Challenge, led by professor and former prime minister Augustin Matata, has predicted a 20 percent decline in government revenues from the copper, cobalt and petroleum sectors, excluding revenues collected by state-owned companies. In the short term, the pandemic could more directly affect customs duties, which are, according to an NRGI study in progress, the mining sector’s most important contribution to the state budget.

In May, the Council of Ministers approved a 35 percent cut in the national budget due to the pandemic’s effects on revenues. The DRC‘s originally 2020 budget reflected domestic revenues of $8.3 billion, assuming $2.4 billion from the extractive sector of which it expected $2.15 billion to come from the mining sector and $262 million from oil producers. The pandemic will also affect local governments in producing regions that have since 2018 received direct payments from mining companies. Local government revenues rely mainly on a portion of royalties, which is based on companies’ turnover.

The state-owned mining company, Gécamines, relies on revenues collected from its joint venture projects, with the revenues based on the turnover or production of the joint venture partners. As the pandemic has stalled several joint venture mining operations, Gécamines will have less money both for its own activities and to hand over to the state.

The Extractive Industries Transparency Initiative (EITI) process in the DRC is facing structural and funding challenges. EITI is a global good governance standard for oil, gas and minerals, and in October 2019, the EITI International Board gave the DRC 18 months to carry out thirteen “corrective actions.” However, movement restrictions, combined with the government’s financial constraints, mean that the pandemic may significantly stall implementation of the corrective actions, which will in turn delay the process of validating the DRC as an EITI member country.

At the time of writing EITI staff had not been paid for about five months. Although a new EITI coordinator has been nominated, the appointment decree from the president is still pending. The delay in the appointment of the new coordinator will likely paralyze the EITI work plans and affect the release of the DRC’s 2018 reconciliation report (the report comparing what the companies report paying the government and what the government reports receiving from companies). Donors are keen to support the EITI process in DRC and require a signal from the government that demonstrates commitment, notably the signing of a series of decrees including those appointing the new coordinator, a beneficial ownership decree and the revised EITI decree. Some of these, such as the beneficial ownership and the revised EITI decrees, have been pending for more than one year.

Beyond EITI, the DRC continues to face a range of governance challenges in relation to the extractive sector. One pandemic-related development that requires monitoring is the Ministry of Mines statement that a reduction in taxes/royalties for the sector is an option, albeit a remote one. The government put in place support measures for the sector in 2008 in the wake of the global financial crisis. However, there has been limited analysis of the value or effectiveness of these past measures.

In March, the government established a task force to devise a recovery plan. The task force has not yet reported publicly.

The country expects to take advantage of the rebound in demand for and prices of strategic minerals. However, without better management of the mining sector, it may not realize the potential revenues. Good governance reforms in relation to extractives remain imperative to the DRC’s economic future. Amongst the most critical are reform of state-owned extractive companies such as Gécamines, particularly given their role in management of the mining sector and revenue collection, and significant deepening of transparency in the sector to help root out corruption. As the IMF and other funders engage with and support the DRC in coping with the impact of the coronavirus pandemic, they should place high priority on enacting these reforms urgently. The IMF had, in September 2019, stated that a review of the management of the state-owned Gécamines is urgently needed.

Should the government consider any form of fiscal response for the mining sector, officials should act with due caution. The sector is heterogeneous, and the impacts may vary from one sub-sector to another, and even from one project to another. Any fiscal response should define the objectives of intervention and ensure that oversight actors can monitor these effectively.