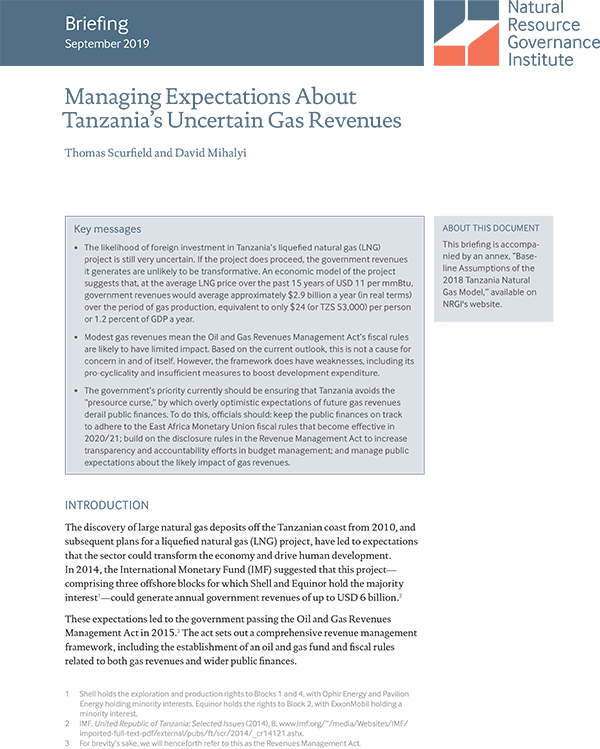 With negotiations between the Tanzanian government and a consortium of companies for a game-changing liquefied natural gas (LNG) project continuing, a decision on whether the project will proceed is still some years away.

In this brief, the authors update a previous analysis of the possible outcomes for the LNG project and its potential impact on public financial management. This update accounts for new information and changes in company planning.

There is a reasonable chance that foreign investment in the LNG project will not happen under current conditions. If the project does proceed, the government revenues it generates are unlikely to be transformative. NRGI’s economic model and specific assumptions of the project suggest that, at the average LNG price over the past 15 years of USD 11 per mmBtu, government revenues would average approximately $2.9 billion a year (in real terms) over the period of gas production, equivalent to only $24 (or TZS 53,000) per person or 1.2 percent of GDP a year.

As the authors discuss in the brief, modest gas revenues mean the Oil and Gas Revenues Management Act’s fiscal rules are likely to have limited impact. Based on the current outlook, this is not a cause for concern in and of itself. However, the framework does have weaknesses, including its pro-cyclicality and insufficient measures to boost development expenditure.

The government’s priority currently should be ensuring that Tanzania avoids the “presource curse,” by which overly optimistic expectations of future gas revenues derail public finances. To do this, officials should: keep the public finances on track to adhere to the East Africa Monetary Union fiscal rules that become effective in 2020/21; build on the disclosure rules in the Revenue Management Act to increase transparency and accountability efforts in budget management; and manage public expectations about the likely impact of gas revenues.

The model and data used for this brief are here.