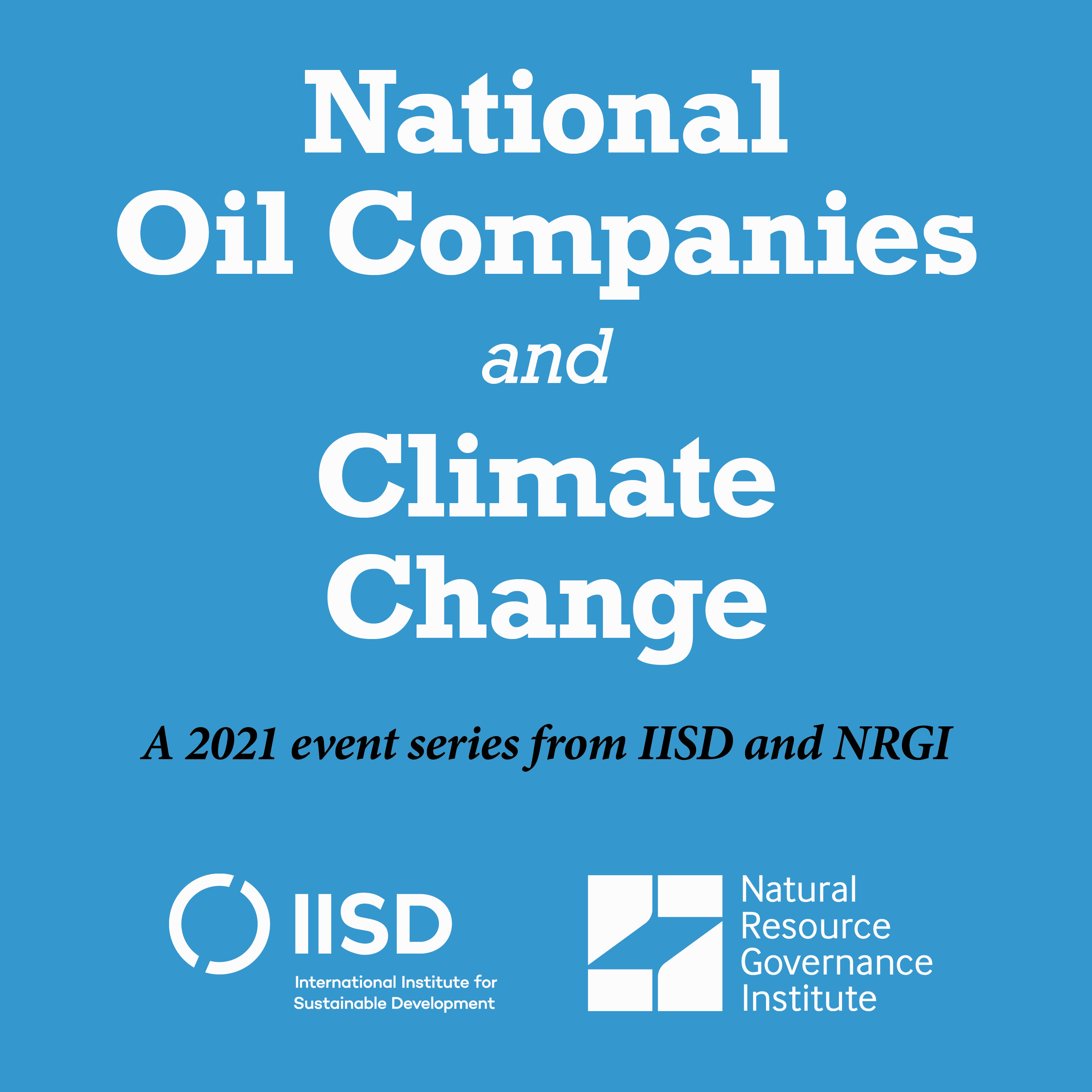 It is also important to tailor such strategies to suit different contexts given that some countries are more exposed to international markets, some NOCs are more indebted than others, and not all NOCs are equally positioned to pivot into renewable energy. Yet, unlike international oil companies (IOCs), which experience pressure from shareholders and consumers, NOCs are more often subject to domestic political pressures.

Given these challenges, what factors drive NOC decision-making and what are their implications for climate action? In particular, what levers may lead to more ambitious climate action from NOCs? On 13 July, the final webinar in the “National Oil Companies and Climate Change” series, hosted by  the International Institute for Sustainable Development (IISD) and the Natural Resource Governance Institute (NRGI), explored these questions in depth.

Alexandra Gillies of NRGI opened the discussion by framing the fundamental challenge: the climate emergency requires more concerted action by NOCs (and their governments), but stakeholders, campaigners and environmental advocates have not yet translated the incentives and tactics most commonly applied to international oil companies (IOCs). She noted that while incremental emission reduction steps may seem more feasible in the short run, these pale in comparison to the scale and urgency of the climate crisis.

Laurie van der Burg of Oil Change International shared lessons from her work campaigning for change within IOCs and the May 2021 Shell climate case win, which forced the company to reduce its CO2 emissions 45 percent from 2019 levels by 2030.

Chido Muzondo from IISD discussed how insights she gained from engaging with state-owned companies, such as highly coal-dependent power producer Eskom in South Africa, could apply to the NOC context. In particular, Chido explored which engagement strategies could lead to positive outcomes on the ground for workers, the utility company, and the climate.

Paasha Mahdavi from the University of California Santa Barbara analyzed the political economy of reform and key drivers for change in different NOC contexts. He mentioned that, in the complex relationship between governments and NOCs, influence tends to flow both ways, with both actors holding conflicting priorities at times.

In turn, Lourdes Melgar from the Baker Institute Center for Energy discussed how political leadership and government priorities, particularly in Mexico, play an important role in shaping NOC decisions.

Within and across countries, four main lessons emerged:

Interdisciplinary collaboration and tailored messaging are essential. Chido Muzondo highlighted how in South Africa, it has been crucial to engage in constructive dialogue with Eskom and build on the utility company’s initial progress on electricity sector reform and renewable energy investment. Acting as a subsidy watchdog and throwing a spotlight on public bailouts of the company has also been an effective way to gain public traction and pressure Eskom to improve financial performance. Laurie van der Burg agreed that climate advocates should collaborate across disciplines, using tactics including investigative journalism, climate protests and litigation to increase public pressure on oil majors. Not only does employing such a range of approaches increase the chances that some will succeed, they can also mutually reinforce each other—for example, shifting public opinion in the Netherlands helped create the conditions for a court to rule against Shell.

Four main levers can influence NOC behavior: political leadership, internal pressure, domestic public pressure and international pressure. As Paasha Mahdavi and Lourdes Melgar pointed out, political leadership by far exerts the most power upon most NOCs, which receive their mandate from their governments and must respond to national economic and environmental priorities. The other levers tend to be weaker influences on NOCs than IOCs, but they can still make a difference, even when government priorities are not fully aligned with climate goals. NOCs can both drive change internally and influence their governments, especially where they have a strategic interest in doing so. The Kuwait National Petroleum company, for example, invested in solar energy not primarily for climate reasons but to reduce the risk of energy imports and improve the recovery of oil from mature wells. Non-petroleum industry pressure can also influence NOC ambitions, as in Iran where domestic industries’ energy needs caused them to push back on the NOC’s plan to increase liquefied natural gas (LNG) exports; in South Africa, trade unions have vocally engaged Eskom around its strategic future. In terms of international pressure, NOCs that require international finance to satisfy long-term demand may be the easiest to influence.

Political motives and government signals can delay or accelerate the energy transition. In certain cases, officials or departments within the government might disagree on how to push the NOC to make more ambitious climate plans. Chido Muzondo mentioned that in South Africa, the president’s willingness to shift away from fossil fuels often conflicts with the views of the Department of Mineral Resources and Energy. In other contexts, a new political ideology may cast the NOC as crucial to the economy’s future. This has happened in Mexico, where the government has heavily invested in Pemex and future oil refining projects. In any case, neither governments nor NOC management teams are monolithic, and advocates should look for opportunities to play to their internal differences.

While incremental change may be necessary, it is important to focus NOC and government attention on rapid transition. A managed and equitable phase-out of oil and gas production is critical for the planet. But panelists emphasized that reaching this goal may require smaller steps along the way, such as first ending unconventional or deepwater production, and that the timing of reforms will vary in different contexts. That said, in oil-dependent countries with large NOCs—where phase-outs are the most contentious—decision-makers may be tempted to limit reform or to ignore the implications of a fast-transition scenario. Many of these governments believe an energy transition will happen, but unrealistically think their NOC will be the last one standing. Almost all will be wrong. And as Laurie van der Burg pointed out, change can come very fast as we’ve seen this past year, making previously implausible scenarios possible or likely. As such, analysts and advocates should focus government and NOC attention on the implications of (and the need for) rapid transition.

There are ample opportunities to influence NOCs on climate change—but those trying to use them will be most successful if they understand the dynamics at play and how to leverage them.

In order to further distill the lessons learned from the “National Oil Companies and Climate Change” webinar series, NRGI and IISD will publish a policy brief in the second half of 2021 which will synthesize key conclusions and make recommendations for governments in oil producing countries, NOC leaders, climate advocates, and the parties to international climate agreements.

Joachim Roth is a policy analyst with the International Institute for Sustainable Development's (IISD) energy team. Patrick Heller is an advisor at NRGI and a senior visiting fellow at the Center for Law, Energy & the Environment, University of California, Berkeley. Greg Muttitt is senior policy advisor for energy supply at IISD.