A Mining Environmental Disaster in Mexico Sparks a National Debate

On September 7, Mexico’s environmental officials denounced the spillage of 40 million liters (10.5 million U.S. gallons) of sulfuric acid into the Bacanuchi, an affluent of the Sonora River, the major water source in one of Northwest Mexico’s driest states. Grupo Minera Mexico, which owns the Buena Vista del Cobre copper mine, is being held responsible. 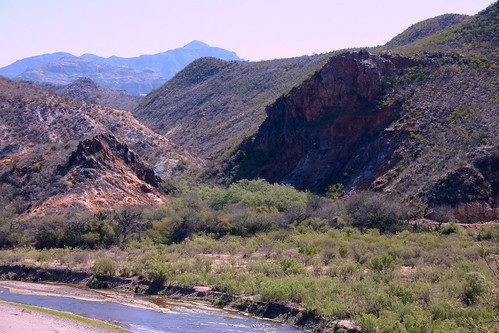 The Sonora was one of two Mexican rivers polluted in a chemical spill from a copper mine.

Beyond chemicals that have killed fish and endangered residents, the spill has unleashed a torrent of national debate. As public anger rises over the mine’s lack of accountability, the Federal Attorney for Environmental Crimes has filed charges with the Special Environmental Unit of the General Attorney. Grupo Mexico and Buena Vista del Cobre risk losing their mining rights, and current processes could well change the environmental standards by which Mexico’s poorly regulated private sector operates. It’s a very sensitive subject, given the country’s recent energy reform, which opens the oil sector to foreign-owned private corporations.

In broader terms, the debate raises questions about the disproportionate use of water by mining operations in areas where water is scarce: How much water is consumed by mining operations? Who decides who gets how much water in areas of scarcity? To what extent are water sources destroyed and water courses polluted? How willing and capable are the local and national public agencies to regulate, monitor and protect Mexico’s water? How much information regarding these matters is available to the water users, the media and citizens at large?

A new transparency, accountability and governance agenda is emerging around mining and water issues in Mexico and Latin America. NRGI’s Mexico partner Fundar has launched a website with information about the social and environmental repercussions of extraction and warned about the alarming lack of regulation and enforcing capacities in Mexico’s mining sector, which is managed on the basis of a law approved way back in 1992.

Despite challenges, it’s encouraging to see that civil society is taking part in this debate by backing up its claims with relevant information and calling for better regulation.