An unprecedented crisis is gripping the Tunisian hydrocarbon sector. A sharp decrease in productivity resulting from a natural decline in proven reserves has combined with a decrease in investments, due in part to strong social movements, to aggravate the country’s energy deficit. This deficit accounts for one third of the country’s overall trade deficit, which in turn impacts the country economically and but also socially, including the high inflation rate from which Tunisians have been suffering. Legal reform is necessary to stem this crisis, and reintegrating the use of a model contract for oil and gas should be part of that reform.

The use of a model contract in hydrocarbon projects is in line with international good practice and is a useful means of 1) placing governments in a better negotiating position vis-à-vis companies and 2) promoting consistency between contracts and legal/fiscal frameworks. The model contract has a long history in Tunisia’s hydrocarbons sector; indeed, the very first legal framework related to the sector (adopted in 1948) included a model contract. But such contracts were omitted in subsequent decrees and adopted decree laws, and some fifty years passed before they were used again, in 1999’s hydrocarbon code. A contract template was adopted in that code, and changes to the template were to be limited to specific elements such as the work program, the participation of ETAP (Entreprise Tunisienne d’Activités Petrolières) as the state-owned oil company, and the threshold value above which the government would have to approve subcontracts. Fiscal terms were primarily set in the law, though some major elements were left to be negotiated further, especially for production sharing contracts into which ETAP and investors entered.

In 2013, the government launched a legal reform process that centered on attracting more investment and embedding transparency and good governance provisions in the hydrocarbon code. These principles were enshrined in the 2014 constitution, which also introduced a requirement (Article 13) that parliament approve natural resource contracts. But despite these developments, reform efforts stalled. Some movement finally came in 2017, when parliament adopted limited amendments to the hydrocarbon code, mainly around implementing the constitution’s parliamentary contract approval requirement.

However, this reform also unfortunately removed the model contract component of the Tunisian legal framework. The head of parliament’s energy committee justified this by arguing that the adoption of a new model contract would be too time-consuming. The parliamentary commission decided to postpone discussion of the model contract until the next phase of reforms began. But momentum for further reforms has been slow to build, and in the meantime the absence of a model contract means that all elements of a contract are now theoretically open to negotiation. This creates the potential for inconsistencies with Tunisia’s hydrocarbons code, as was observed in some recently approved agreements. Additionally, the parliament’s new oversight powers over the contract system further increases the potential negative impacts of deviations, since parliamentary approval could give the contracts the same legal value as the hydrocarbons code.

Different stakeholders, including NRGI and the Tunisian civil society organization Solidar, have advocated for the reintegration and reinforcement of the model contract mechanism within the hydrocarbons code. Solidar disseminated a report on the issue, including propositions for a new model contract, in February.

Why Tunisia should use a model contract

Legal systems that rely more on detailed laws and regulations than on individual contracts are better equipped to avoid drawn-out negotiations and the risks that arise when governments and company negotiators have too much discretion over the structure of contracts. The figure below summarizes the interactions among contracts, legal frameworks and governance. 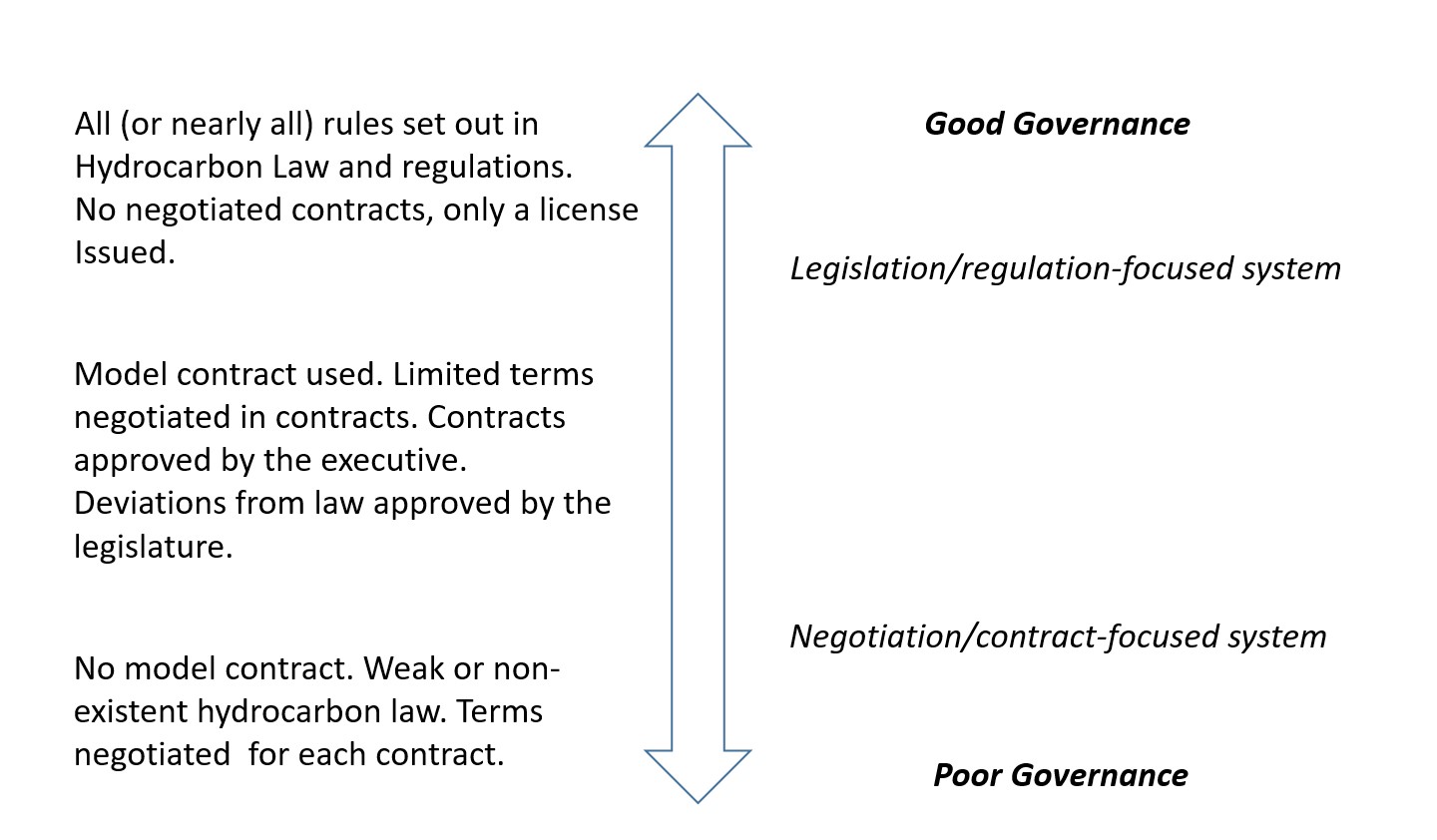 The use of a model contract ensures certain benefits for various stakeholders, including visibility for investors; greater negotiation skills and monitoring capacities for the government; and a good tool for oversight actors. Each of these benefits is detailed below.

By laying out the general terms of an agreement, model contracts allow investors to better assess a potential investment opportunity; the absence of such clarity can discourage investment in a country like Tunisia.

Greater negotiation skills and monitoring capacities for the government

The post-revolution Tunisian context has been characterized by governmental instability that has affected the bureaucracy in charge of extractives. The frequent reshuffles that have resulted from the relocation, merging and fracturing of departments have had negative repercussions on the performance and morale of an ever-changing staff. Such volatility weakens government officials’ negotiating stance, since these officials are often new and not necessarily aware of the different technical and legal aspects of complex fields like extractives. A model contract provides a measure of stability in such environments, since it can allow all officials—new or seasoned—to enter negotiations with a a contract whose basic structure and terms are aligned with the country’s legal framework. In addition, standardized terms allow the government to better monitor the implementation of contracts.

While a model contract will not be strictly binding on the Tunisian government, it will at least provide a tool allowing oversight actors to compare the adopted models with signed contracts, as well as to detect any gaps and/or conflicts that arise therefrom. This will also make the debate around signed contracts (including in parliament) more constructive, since they can be based on objective criteria, and will also hopefully expedite contract review and approval. By facilitating foreign investment and strengthening the government’s negotiating position, the reintroduction of a model contract could help alleviate the myriad economic and governance challenges facing Tunisia’s hydrocarbons sector. Model contracts can also contribute to building trust among different stakeholders by serving as tool for constructive debate. That is not to say adopting a model contract will cure all ills—it is a necessary but not sufficient change to the hydrocarbons sector. Among other reforms, Tunisia will also need to have an “open contracting” process to ensure the effective use of the model contract mechanism.

Wissem Heni is a senior officer at the Natural Resource Governance Institute (NRGI). Hichem Mansour is an energy executive and member of Tunisian NGO Solidar. Amir Shafaie is the legal and economic programs director at NRGI.