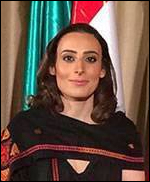 Laury sets the strategic trajectory of the Middle East and North Africa region in accordance with the organizations’ mission and vision. She represents NRGI in the region and she oversees the implementation of programs and projects. Prior to becoming the director, Laury was the MENA senior officer in charge of the media and parliamentary capacity building programs. She played a significant role in establishing the Middle East and North Africa Regional Knowledge Hub Course in Lebanon in 2014.

Previously, Laury was executive director of Beirut-based Arab Region Parliamentarians Against Corruption (ARPAC), where she worked with parliamentarians and civil society groups to strengthen legislators' oversight and legislative capacities. Laury was invited by the Carter Center to help monitor the first Tunisian elections after the fall of Ben Ali. Prior to working with ARPAC, she was in charge of regional grassroots projects in Bahrain, Yemen and Saudi Arabia focused on promoting the role of women in development and policy-making. She also worked as grant manager, advocacy specialist and trainer for several international nongovernmental organizations, including IREX, ACDI/VOCA and the U.N. Economic and Social Commission for Western Asia. There, she mainly focused on civil society democracy campaigns in Lebanon and Iraq.

Laury also was lead author on an Israel case study and the co-author of a Norway case study in NRGI’s Political Parties and Natural Resource Governance: A Practical Guide for Developing Resource Policy Positions publication, released in April 2018.

Laury holds a master’s in Middle East politics from the University of Exeter and a B.A. in communication arts from the Lebanese American University. She speaks Arabic, French, English and Armenian.